So it be summat I canna unnerstan?

This is Part 2 of the 7A-part series on Terry’s use of similes and metaphors in his Discworld writings, especially as found in Equal Rites.

You can find Part 1 here. See that article for an explanation of the page numbers I’m using.

Let’s dig right in to the second batch of “metterfors”, as Granny Weatherwax calls them.

Page 40 – The room hadn’t changed, although the lantern had its own little solar system of very stupid moths.

You must remember that a metaphor is only effective if the reader (or listener) understands the comparison. Here, you have to know about moths and their attraction to light and about the composition of the solar system.

One of the oldest phrases in regard to the insects is this: Like moths to a flame. That simile, as well as Terry’s, shows that (stupid) moths are attracted to light – in the case of a flame, probably to their deaths – often in a cluster going around and around it just as the planets (rather loosely) cluster around the sun and whirl around and around it.

While the moths aren’t nearly so regular in their orbits, I still think this metaphor paints a satisfactory picture in your mind for the motion of the stupid flutterbugs.

Not intimately familiar with a half-brick? Well, neither am I, but I can still picture one. It’s just a normal brick, as in brick and mortar, that’s somehow been chopped roughly in half.

Point being, it’s a lot easier to throw a half-brick – through a window, say – than a whole one.

So imagine you’re a plate glass window minding your own business at the front of a shop in the Street of Cunning Artificers when suddenly, without any provocation whatsoever, a half-brick flies through the air and renders you as a million shards of former silicon both inside and outside said shop.

That’s what Granny felt like when the magic in Esk’s staff came upon her unawares.

Page 45 – Even with the power throbbing through her head it was a painfully hard task, like threading a needle by moonlight, but eventually she had a handful of silver.

I’ll let you read the story yourself to understand what the silver threads actually were. We’ll stick to the simile here.

It’s been a long time since I’ve tried to thread a needle, even under normal conditions. Trying to do so only by moonlight must be daunting, to say the least.

Let’s even assume that the moon is full. That’s still not a lot of reflected light to work with.

Answer: Because it meant saving Esk.

Page 46 – She was slumped against the door, and her whole body felt as though it had [a?] toothache.

There are several printing errors in my copy of Equal Rites. For example, one time Esk is spelled “Eask”. So, I’m not sure if the article “a” is missing in this metaphor. I suppose it could work without it.

Those who have never experienced a toothache simply will not be able to relate to this one. A pain in any other part of your body just isn’t the same.

I’ve had a toothache or two in my time. It ain’t pleasant. Having your whole body racked with pain like that would be most disagreeable. The point here is that it was one big ache.

Page 47 – “You thought that Borrowing wasn’t enough. You thought it would be a fine thing to steal another’s body. But you must know that a body is like – like a jelly mould. It sets a shape on its contents, d’you see?”

This is Granny explaining to Esk what she (Esk) had done with the eagle she’d Borrowed.

Years ago, my mother used to say of ill-fitting clothes, “You look like you’re poured into them.”

I never understood until years later what she meant. She meant essentially the same thing that Granny is saying here. The difference is that my mother meant it more strictly physically than Granny did.

What makes this a good metaphor is that nearly everyone reading this will know how a jelly mould works. You pour liquid into it and let it solidify, taking on the shape of the mould. That’s its whole purpose.

Getting more specific with this one is difficult, since Borrowing is involved. So I won’t go there.

Page 50 – The iron fireback resisted bravely for a few seconds before melting like wax; it made a final appearance as a red smear across the fireball and then vanished.

Even if you didn’t know specifically what a fireback was, in the context of a fireplace, you could figure it out. It’s the back side of the fireplace that protects the wall into which the fireplace is built from becoming too hot or catching on fire. A similar term would be a firewall.

So, the intensity of the heat is clearly shown if an object that is supposed to protect (you) from heat is itself disintegrated like so much wax. Wax melts easily, even in low heat, which is why it’s used in candles.

Page 53 – Cern normally had all the sensitivity of a ball-bearing, but his hand stopped in mid-prod, much to his surprise.

Cern is one of Esk’s younger brothers. Here he was about to poke Esk’s magical staff.

He found he couldn’t. And it wasn’t because he didn’t want to. Nor was it because he suddenly became sensitive to his sister or her staff.

Page 54 – He looked, she thought, exactly like a small angry pig.

The “he” is Esk’s other younger brother, Gulta. The “she” is Esk.

I guess in the end this sentence barely qualifies as a metaphor because it turned into a literal, just as Gulta literally turned into a pig.

Pages 56-57 – For once the sky was clear, the high Ramtops standing out crisp and white like the brides of the sky (with their trousseaux stuffed with thunderstorms) and the many little streams that bordered or crossed the path flowed sluggishly through strands of meadow-sweet and go-faster-root.

You’ve seen a bride all in white, narrower at the top and wider at the bottom. This is what the Ramtop Mountains were in Terry’s eye.

I’ll say no more about curves or peaks.

I do wonder what go-faster-root is used for though.

Page 57 – The square was a jigsaw of noise and colour and smell.

The square here is a market square in the town of Ohulan. The jigsaw, I’m sure, is actually a jigsaw puzzle, not the instrument used to cut the pieces apart.

Three senses all neatly fit together here – sound and sight and smell. They may have seemed a bit jumbled at times, but after you sorted them out a bit, everything made sense (pune intended).

Page 59 – Unlike Granny, who dressed like a very respectable raven, Hilta Goatfounder was all lace and shawls and colours and earrings and so many bangles that a mere movement of her arms sounded like a percussion section falling off a cliff. But Esk could see the likeness.

Several items to cover in this one.

First, Granny and the raven. Granny virtually always dressed in basic black. A raven, who hasn’t much of a choice, dresses in black. Nuf said.

Second, Hilta and the percussion section. Where Terry got this one from I’m sure I don’t know. But the thing is, I can still hear this one happening quite clearly in my head. Can’t you? Sure you can.

Finally, it’s not really a metterfor, but the fact that Esk could see a likeness between the two witches – Granny and Hilda – simply plays nicely into the scene, doesn’t it?

Page 60 – Esk held out her hand. Hilta’s fingers were so heavy with rings it was like dipping into a sack of walnuts.

I’ve seen walnuts – whole ones, even – but I’ve never had a whole bag of them – much less put my hand into such a bag. Nevertheless, from the size and shape of walnuts, I can imagine what this was like. I’m guessing you’ll have to imagine this one along with me.

Here endeth Part 2. There’s much more to come on another day.

Get your copy of Equal Rites at Amazon here.
Summary 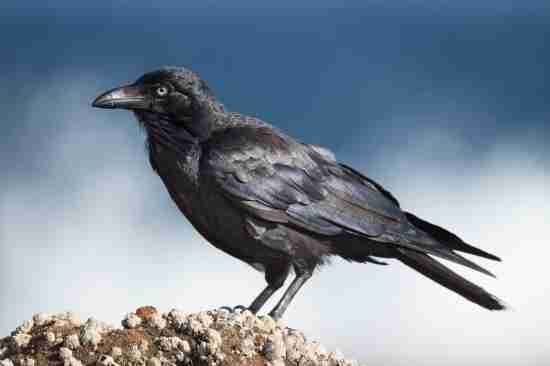