Before I get to the narrativium or the Wintersmith himself (itself?), I must tackle the appearance of Horace the Cheese.

Cheese-Rolling Is a Thing

If even Wikipedia acknowledges the Cooper’s Hill cheese-rolling event with a page, you know it must be worthy of mention elsewhere.

Based on the video below, I think the event really ought to be called People-Rolling.

Now, Terry doesn’t go into detail about any cheese-rolling in Wintersmith, but it certainly is implied with the inclusion of Horace, a Lancre blue cheese roll. That said, it’s a bit puzzling as to why Horace is there at all. He doesn’t really do anything, not even as a pseudo-feegle.

Horace just shows up from time to time and is…unusual. If I’m missing his significance somehow, please enlighten me.

Narrativium Is a Thing

Narrativium is a thing (okay, an idea) just as much (if not moreso) as Horace. I’m pretty sure Wintersmith hosts Terry’s first use of the term in the Discworld series. (It’s mentioned in The Science of Discworld earlier, but that doesn’t count here.)

You’ll also see narrativium referred to as narrative causality, but where’s the fun in sounding so formal?

The most brief definition of narrativium I can give you is that it’s the basic element of stories.

Narrativium is probably best described by example. So, I give you the following three, often-cited examples of narrativium. I’m sure you’ll recognize all of them and will then be able to recall more on your own.

The Poem’s the Thing

There’s a poem, of sorts, in Wintersmith that, as far as I can tell, is original with Sir Terry. The version below may not be complete, but it’s as much of it as I can piece together from this novel.

These Are the Things That Make a Man

According to Terry (or Tiffany?) there’s more to it before you get to those last three important lines – lines that the Wintersmith never heard.

Strength. Time. Love. I’m not going to think about it too hard, but I’d say these are really all you need to make a good man.

Terry was a good man. I hope I am too.

Originally found in A Hat Full of Sky, which is another Tiffany Aching story, the Feegle Glossary at the beginning of Wintersmith has been expanded. These are a few of the more significant additions.

Cack yer kecks: Er, to put it delicately…to be very, very frightened. As it were.

Spog: A leather pouch, worn on the front of his belt, where a Feegle keeps his valuables and uneaten food, interesting insects, useful bits of twig, lucky dirt, and so on. It is not a good idea to fish around in a spog.

I trust you can too.

Find your copy of Wintersmith at Amazon.
Summary 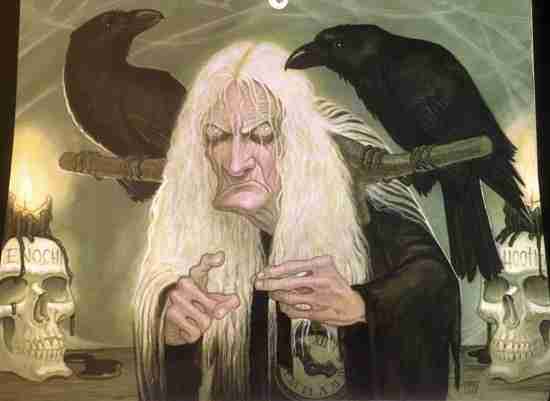