This be why we dinna like tae tell oor names tae anybody. Right, Rob?

First, I just want to mention that as I get near the end of the series, it’s getting more difficult to find good artwork to go with the narrativium. The vast majority of what I personally have available and what’s available online pertains to books written earlier in the series.

So, if the pictures seem to you to be fewer and farther between, you’re right. They are. Sorry about that, but it is what it is.

Whom’s in Whom’s Whom?

I know good grammar as well as (probably better than) the next guy, but I just couldn’t resist going slightly off the rails in that heading just above.

Whom’s Whom catalogues all the rich and famous people (presumably non-humans as well) on the Disc. We know for sure that it includes the Lavish family – Joshua, Cosmo, Pucci, and all the rest – probably even Jocatello La Vice!

But I’m sure the paragraph or two following each name that tells of their history, wealth, and reason for being included in the book doesn’t tell all (presumably none) of their family or personal secrets.

It’s these secrets that make up much of the narrativium in Making Money. So let’s take a look at those.

A Rose by Any Other Name Would Smell

Perhaps a rose would still smell as sweet under an alias, like thistle, but many of the characters hiding behind a nom de guerre in this story do not.

Let’s start with Joseph Lavish. While we don’t exactly hear that he used an alternate name in Making Money, it’s not too hard to imagine his doing so during more than one of his…um…exploits.

I mean, consider what Moist and Adora Belle found hidden in his closet. There may or may not have been literal and metaphoric skeletons locked in there.

At the very least, I’m sure Joseph frequently his behind something – if only for fun.

Then there’s his son Cosmo. Cosmo didn’t hide behind a pseudonym, it’s true. He rather flaunted his alter ego as he tried desperately to become Lord Vetinari.

So, in a very twisted sort of way, Cosmo wasn’t often who other people – even his own family – thought he was. Only Heretofore really knew who Cosmo was and wasn’t – possibly better than Cosmo himself.

“All the World Loves a Clown”

Good clowns are extremely rare. Emmett Kelly was one of them. I got to see him in person at a circus when I was young. I can still remember his routine which was sweeping the circle of light from a spotlight under a rug.

Clowns by definition are hiding behind a name as well as a face and a costume. Dr. Whiteface, head of the Fools’ Guild, is a prime example. I don’t think we ever learn his real (birth) name.

Mavolio Bent is a related example. It’s a little more difficult to tell whether Mr. Bent is tucked inside Charlie Benito or the other way around.

Even as Mavolio Bent, he still has that clownish walk. It’s not hard to imagine that Charlie Benito never (or extremely rarely) made mistakes with his sums.

What’s It All About, Al?

Lastly, we come to Albert (or Alfred, in some US editions) Spangler and an associate at the Royal Bank – Owlswick Jenkins.

Let’s look at Owlswick first. It’s somewhat surprising that, as a postage stamp forger, Owlswick didn’t come up with a pseudonym on his own. It’s only after Moist rescues him from the Tanty that he very temporarily becomes Exorbit Clamp and quickly resolves to Owlswick Clamp.

Personally, I wish he would have stayed with Exorbit. It’s got a nice ring to it, don’t you think?

And then, of course, there’s the master – Moist von Lipwig – who, as you probably know by now (along with Cribbins), was originally Albert Spangler. Just as he saved Owlswick, so he himself had earlier been spared being hanged at the last second (or a little later?) by Lord Vetinari.

But all of that belongs to the narrativium of Going Postal. Other names he’s rented in the past include Mr. Robinson, Mundo Smith, Ethel Snake (presumably a female), Edwin Streep, Jeff the Drover, and Trespass (a wise choice?) Hatchcock. Obviously this man is no stranger to the alias game.

His most widely-known name – Moist von Lipwig – comes with a bit of history built into it. The von Lipwig part means that he’s from the town of Lipwig in Uberwald. Presumably von means from in Uberwaldean just as it does in Roundworld German.

This does pose a bit of a problem though. From the days of his youth, Moist was familiar with Lipwigzer dogs which come from the Lipwig area. But he really grew up as Albert Spangler, who lived in…we don’t know where. I suppose it’s possible that Albert was von Lipwig too.

Get your copy of Making Money at Amazon.
Summary 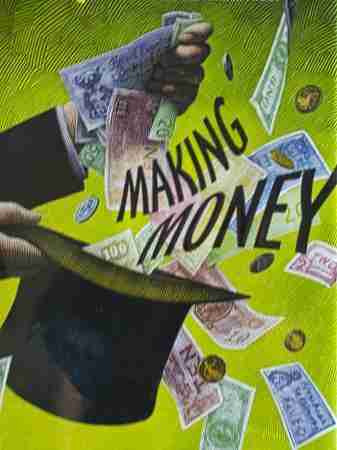