Though it’s normally Rincewind whose life is in mortal danger, this time it’s Twoflower’s that’s hanging by a thread – literally. He gets hit by an archdruid’s sickle which knocks him all the way to….

I won’t get ahead of myself just yet.

According to an elderly, female necromancer who can read Caroc cards, Twoflower isn’t dead – not exactly. As Cohen the Barbarian phrased it, “He’sh gone.”

Rincewind would soon find out where he’d gone to, after drinking something the necromancer pulled from a small, wooden chest (not the Luggage). Again, deferring to Cohen: “She shays it’s sort of medicine,” – though only medicine in the same way that a bullet to the brain will cure you of forgetfulness.

Rincewind – and somehow, the Luggage, because it will follow its owner anywhere – discover Twoflower in Death’s domain; that is, his house in his land. Twoflower is attempting to teach Death (aka Mort, in this book), Famine, War, and Pestilence how to play a card game. Twoflower claims he doesn’t know the word for it in Rincewind’s language. “In your language it’s called a thing you put across a river.”

Of course, Rincewind, being Rincewind (and Terry, being Terry) can only come up with aqueduct, fishing line, weir, and dam.

I maybe shouldn’t add the spoiler here, but you probably already guessed, so I don’t care. It’s bridge – Contract Bridge, in particular.

Shortly after this, Twoflower pulls out his camera again. In The Colour of Magic, Terry called it an iconograph. Here he names it an iconoscope. I’m not sure why. It may have been a simple error in consistency, but I’ve read elsewhere about his choice of words – how he is very choosy about them. Still, no one is perfect. Who would have thought (at the time) that someone like me was going to point out an insignificant difference like this between the two books? Though I’m sure I’m not the first to notice.

Both Rincewind and Twoflower have a “fine blue line” trailing away from (approximately) their ankle to their body back in the real (Disc) world. At least Rincewind seems to comprehend that this line should not be severed, especially by, say, an extremely sharp scythe.

Unfortunately, that’s exactly what Death’s adopted daughter, Ysabell, is holding as they try to leave Death’s domain – against her wishes.

Fortunately, they escape her, are nabbed by the Octavo again, and are fervently wished home again (by Rincewind himself), safe and nearly sound. They recover back at the fire from whence they came, in the company of Cohen and Bethan, the young maiden whom Twoflower rescued (against her will) from being ritually sacrificed by the druids and which rescue caused most of the trouble in the first place.

I really like authors, such as Terry, who can turn a “normal” concept on its head – or at least, on its ear – and still have it make some semblance of sense.

Here we have druids who are computer programmers and hardware consultants.

There’s an aged hero in Cohen the Barbarian who looks like he should be in a nursing home but still fights – and wins – like he’s 25.

Characters die…but not for…good; that is, not permanently and have interesting conversations while “dead”.

We have a ritual sacrificee who’s willing to be ritually sacrificed, because of what she’s been promised following the rite.

Death can play cards with his buddies, who all ride horses, of course. All 4 of them.

And Death has an adopted, though seemingly slightly insane (but then, who wouldn’t be in her situation) daughter.

Get your copy of The Light Fantastic at Amazon.
Summary 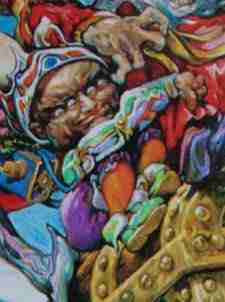