Discworld is generally a creation of the British Georgian Era; that is, if you want to compare it to something a little closer to home. (I had originally thought of it as Victorian until I actually looked up the historical time periods and compared them to what Discworld inhabitants had available to them.) So, if you can picture our world in the 1700s, especially in England, I think you’ll have a good idea of what life is like on the Disc.

There are no cares or planes. Trains don’t appear until very late in the series. There is no electricity, nor are there firearms beyond the crossbow – with one exception.

Perhaps it was true for most people back then that you didn’t travel far from home. Certainly our modern tourism industry didn’t exist.

So it maybe isn’t quite so surprising then that we get to meet the first Tourist on the Disc in the character called Twoflower.

Twoflower is a rather strange creature, basically humanoid, but with 4 eyes. And I don’t mean he’s wearing glasses. (See below for what is probably an all-too-accurate drawing.)

As a Tourist, he naturally brings his Luggage.

The Luggage from Hell?

Actually, I’m fairly certain The Luggage wasn’t made in any place close to any hell (or Dungeon Dimension), but at times it clearly acts like it was.

And yes, The Luggage does act – the reason being that it’s made of sapient pearwood. (We don’t ask why.) Many familiar with sapient pearwood are surprised that enough of it even exists on the Disc to fashion something as large as The Luggage.

All luggage desires an owner.

This Luggage takes ownership to the extreme. And it can easily afford to do so, since it runs on hundreds of little feet and is virtually indestructible. It will follow its owner anywhere and everywhere. Should it ever become separated from its owner, Do Not Stand In Its Way!

Did I mention the rows of nasty teeth that are clearly visible when the trunk-like lid opens up? You don’t want to experience the power of those teeth and “jaws”. (Cue sinister music.)

I don’t know of their force from personal experience, but I’ve read about too many formerly-living people who have.

To witness the capabilities of The Luggage can cause even the bravest of heroes to whimper like a whipped puppy and to flee faster than he knew he could run.

And yet, The Luggage can be very helpful, especially when filled with gold coins and when you need your laundry done.

The Luggage doesn’t have eyes or ears, but I wouldn’t want to be the one to tell it so, at least, not from a distance closer than a mile or so.

The video below is, sadly, not the original Luggage, but it’s still pretty awesome. I believe it was made for the North American Discworld Convention in 2011 (NADwCon2011) held in Madison, Wisconsin, which happens to be just an hour west of where I live. Too bad I wasn’t as interested in the Disc then as I am now.

But now I should get back to Twoflower.

Since Twoflower is in foreign parts; that is, Ankh-Morpork, he naturally doesn’t speak the language. In an effort to remedy the situation, he carries a translation book which apparently translates the Trob language into the language of the city. I don’t think we know what language that is, but you can assume it to be English for all practical purposes.

Unfortunately, Twoflower seems to think you use the book more like a verbal thesaurus. When he encounters his first native, Blind Hugh, he says…

“I wish to be directed to an hotel, tavern, lodging house, inn, hospice, caravanserai.”

Later in the tavern called the Broken Drum, Hugh, conversing with the proprietor, Broadman, shows that he isn’t quite sure what the book is for either. Hugh tells Broadman…

“It tells him what to say. I know it sounds ridiculous.”

To which Broadman replies…

“How can a book tell a man what to say?”

I think there’s a bit of Terry peeking through here. He just might be referring to people who blindly believe everything they read and repeat the same aloud to others.

He could even be taking a poke at religions, such as Christianity, Islam, etc., in which believers speak what they have learned from the Bible, Koran, or whatever documents the religion considers truth.

Twoflower comes from the city of Bes Palargic in the Agatean Empire which is diametrically opposite Ankh-Morpork on the Disc on the Counterweight Continent.

In a conversation with Rincewind, the Patrician of Ankh-Morpork (whom we later come to know as Havelock Vetinari) explains that, while the Counterweight Continent is not made of pure gold as some would have you believe, it is largely made of octiron. Octiron is an element heavy enough to balance the weight of the continent on which Ankh-Morpork sits, even though it is significantly smaller in area.

Speaking of gold though, the Agatean Empire is vastly richer than Ankh-Morpork. Twoflower has no idea that this is true, however. He considers himself relatively poor, compared to others in his homeland.

Back home, Twoflower was an actuary. “I assess risks,” he says. Boring, by all accounts. He was “just adding up columns of figures” and was sick of it. So he decided to go out and see the world – all of it, if at all possible. He also wants to take pictures of it…but more on that later.

That’s enough for now. Since Twoflower is a main character in The Colour of Magic, I’ll have more to discuss with you about him later I’m sure.

Get your own copy of The Colour of Magic at Amazon.
Summary 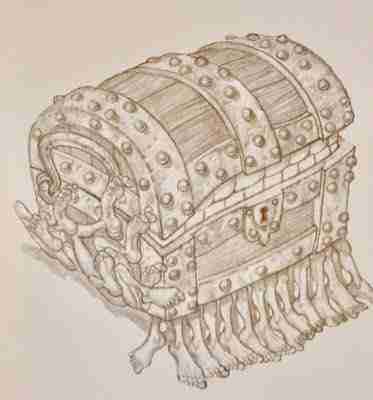 Article Name
Travels with the Tourist
Description
Twoflower is a Tourist from Bes Palargic in the Agatean Empire. He and The Luggage are out to have a great time in Ankh-Morpork.
Author
Gary Sonnenberg
Publisher Name
Narrativium Reviews
Publisher Logo