‘Tis lookin’ like we nae be needed fra’ this arr-tickle. He’s goon an’ tak’ some o’ them fancy words o’ tha’ Bigjobs Vimes.

At first blush, Thud! seems to be another City Watch story with Sam Vimes front and center and his mostly reliable watchmen and women and trolls and dwarfs and other races around the edges.

However, I think these pages of narrativium might be more about magic – or the un-use of it – than you, the reader, first think.

Magic Is Fine, Just Let It Be

Sir Terry writes about the magic of Discworld fairly often. But when you look back at his references to magic, it’s more about magic not being used than actual magical events happening.

The witches of Lancre – Granny Weatherwax, Nanny Ogg, and others – rarely resort to the use of magic, as traditionally implemented.

The wizards of Unseen University – Archchancellor Mustrum Ridcully and his staff – play around with magic but almost never use it. What they contribute to the plot in Thud! is more the exception than the rule.

And that brings me to the quotation from Sam Vimes at the beginning of this arr-tickle. Sam is complaining about the magic that the wizards used to allow his carriage to travel at unheard-of speeds. He doesn’t like magic because it’s virtually undefinable. He’s a copper who thrives on cold, hard, solid facts.

Magic is anything but.

This reminds me of (Arthur C.) “Clarke’s Third Law” which states that any sufficiently advanced technology is indistinguishable from magic. So one has to wonder if the wizards were really just sufficiently advanced technologically. Consider (in novels other than Thud!) that they – Ponder Stibbons, in particular – have developed Hex, which is the equivalent of the Roundworld computer (or phone or tablet) on which you’re reading this arr-tickle.

Use Magic When You Don’t Have To

What I’m trying to say in just a few words with the heading immediately above is that a good author, like Terry, doesn’t resort to magic all the time in his stories. If there’s a better, natural way for an event to happen, just let it happen naturally.

“But this is a fantasy world, where anything can happen!” you say. Sure it’s (probably) fantasy, but that doesn’t mean anything and everything should happen. Even in the realm of fantasy, you want things to be (relatively) believable. Inserting a magical event on every other page doesn’t make for a good narrative. An author who writes that way is “copping out” instead of trying to create a good story.

Terry writes good stories. They’re about “real” people. Most of the stories could happen on Roundworld without any magic at all. In fact, it’s quite obvious in some cases that he got his ideas directly from our Roundworld and just sort of inserted them into the Discworld. He didn’t have to come up with totally new thoughts or ideas that could only happen on some other world or in some other universe.

Doesn’t that make Discworld magical without the magic?

Find a copy of Thud! at Amazon now.
Summary 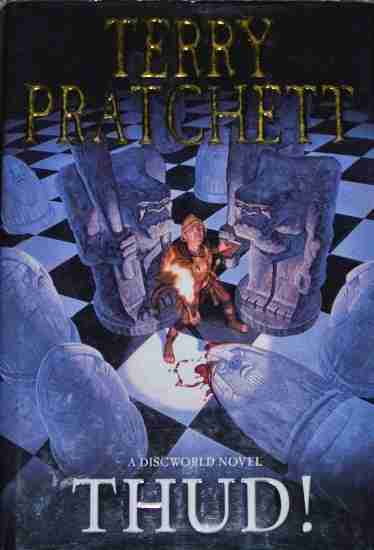 Article Name
Thud! No Magic Required?
Description
My thoughts about the use of magic in Thud! and in the Discworld series in general.
Author
Gary Sonnenberg
Publisher Name
Narrativium Reviews
Publisher Logo