I’ve been putting off writing anything about Sourcery for almost two months.

Because I can’t decide what to write about it.

While I liked the book (I like all the Discworld novels), there’s nothing that really makes this one stand up and say, “Obvz, you should write about this.”

So let’s start with a brief (if possible) summary of the story for those who haven’t actually read the book yet. (And shame on you.)

A Brief History of Sourcery

But Isplore the Red (wizard) had.

Now, just before his death, he enters the magical, metal staff that he gives to his infant son, Coin, and through the staff, guides the destiny of the child.

That destiny is to become Archchancellor of Unseen University and to use magic properly – something the wizards at UU almost never do.

When the time was right, virtually everything truly magical at UU understood that something terrible was about to happen and began fleeing the premises. Most significantly, the Archchancellor’s very magical hat knew that it couldn’t let itself be worn by a sourcerer like Coin. The combination would just be too powerful for all concerned; that is, everyone on the Disc.

The hat gets away from UU by having Conina, daughter of Cohen the Barbarian, steal it. She (unfortunately?) manages to team up with Rincewind, and they head out of Ankh-Morpork toward Al Khali in Klatch at the suggestion of the hat.

Meanwhile, Coin shows up in Ankh-Morpork and – to put it mildly – causes several disturbances, including turning the Patrician into a lizard. He constructs a tower (10 times taller than the Tower of Art) made totally of magic.

But the most important thing he does is give an order that all the books in the Library be burned.

Obvz, the Librarian will have no truck with that.

Meanwhile, Rincewind and Conina meet Creosote, Seriph of Al Khali. (Not that Creosote. The “As rich as Creosote” Creosote was this Creosote’s father.) Creosote is a nice enough guy, but, of course, and unfortunately he has a Grand Vizier by the name of Abrim.

And, having seen Aladdin, we all know what Grand Viziers do. Abrim was no different.

Abrim confiscates the hat and, with its magic, constructs his own tower. The magicians in Al Khali, Ankh-Morpork, and elsewhere battle it out, with little regard for anyone who might get in the way.

Eventually, Rincewind et al get back to Ankh-Morpork with the aid of a flying carpet, of course. Rincewind helps a now-disenchanted Coin get rid of his father, the magic staff. But he and Coin end up in the Dungeon Dimensions. Coin escapes, but Rincewind (sadly) does not.

We’re not told what exactly happens to Rincewind.

Meanwhile, the Librarian has herded the books from the Library to the Tower of Art for safe-keeping.

What I Didn’t Tell You Yet

I’m going to leave the synopsis at that.

Those of you who have read the book know that I’ve left a lot of pieces out – things like the Apocralypse, Nijel, the Ice Giants, and other more or less significant characters and events.

But if I told you all about them, you’d have little to no reason to read the book yourself. And we can’t have dangerous ideas like that floating around here.

What You Need to Know about Sourcerers

You already know that sourcerers are extremely rare beasts.

Terry has Death say of them, “THEY TREAD THE EARTH LIGHTLY.”

Near the end of the novel, Terry says, “Sourcerers never become part of the world. They merely wear it for a while.”

I wonder if he had certain roundworld people in mind with these statements.

You can find Sourcery at Amazon here. 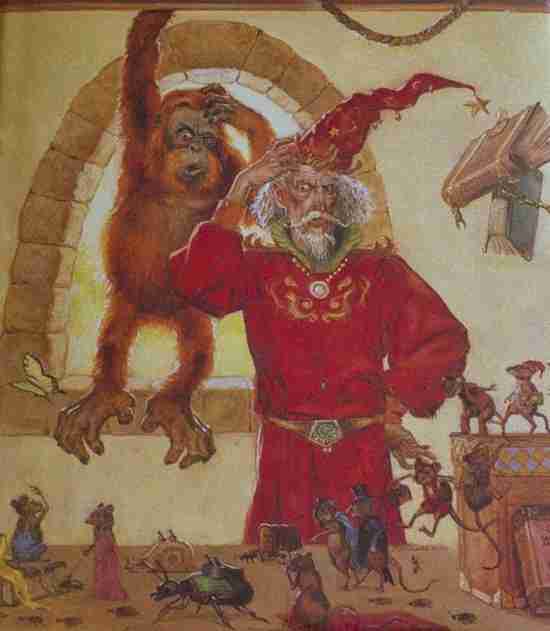