In a normal world, a fire would be a huge cause of concern – especially if your entire city was ablaze, but at the beginning of our story, The Colour of Magic, it’s almost a sidelight. Pun intended here because Terry loves puns as much as or more than I do.

Granted, there will be more details about the fire later, but for now it’s time to meet our hero – Rincewind.

Assuming you knew a little about the Discworld series coming in, you could be fairly certain that one or more wizards would be part of the Narrativium. Rincewind, however, is probably not what you were expecting.

Wizards are supposed to be like Gandalf and Dumbledore, but that’s why Terry gives us Rincewind instead. Every occupation has its “greats” and its “not-so-greats”. Just think of the people where you work and play.

Rincewind knows a semi-notorious thief – Bravd the Hublander. What does this say about Rincewind’s past? What does it say about his future?

If it comes to that, what does it say about Bravd’s past or future? And remember, this is a guy who hangs around with someone known as the Weasel – not likely his birth name, though on the Disc you never know for sure.

Footnotes for Fun and Prophet

Terry loves to use footnotes in his Discworld novels. In my hardcover copy of The Colour of Magic, I get the first one already on page 5. And it’s a doozy! It fills half of page 5 and spills over onto page 6 for three paragraphs more.

It’s a fairly important footnote in that it tells you several significant facts about the Disc. Future footnotes generally will be much shorter but no less important.

It’s in this initial note that we learn of the land called Krull. Keep that name in the back of your brain for now. It will be quite important in the last chapter of the book.

Chapters Are for Kids

Speaking of chapters, don’t get too used to them. The vast majority of Discworld books don’t have them*, and the cool thing is – you won’t miss them.

There are natural breaks, usually for changing scenes, indicated most often by extra space between paragraphs and sometimes with a few centered characters like asterisks.

If you’re following along by listening to audio books, you’re on your own here. This is one of the reasons I prefer hard copy in my hands.

So, if there are no chapters later on, how do you know when to take a break from reading? (I’m getting ahead of myself here. Fine.) I usually count 16 pages and look for a break in the text. That’s how much I normally limit myself to reading because I’m often taking on more than one book at a time and don’t want to spend all night on the Disc, though that wouldn’t be a bad place to spend an entire evening (or life). I imagine many of you do just that, right?

I’m going to stop for now, even though I haven’t mentioned Twoflower before now. I’ll pick up the discussion with him next time. For now, just try to imagine what kind of land a person with a name like Twoflower must come from.

Is it hard to picture such a place?

*Most of the chapter books belong to the Tiffany Aching subset which are usually classified as Young Adult in the library. My guess is that some editor or publisher insisted that young adults can’t follow the Narrativium unless you give them chapters.

You can get The Colour of Magic at Amazon here.
Summary 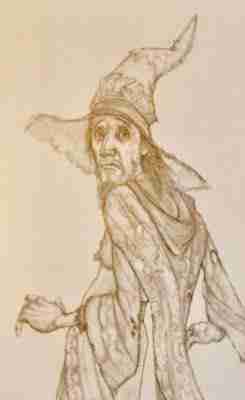 Article Name
The Meeting of a Hero
Description
In which we get our first glimpse of the wizard called Rincewind, who is the main character of The Colour of Magic and its reluctant hero.
Author
Gary Sonnenberg
Publisher Name
Narrativium Reviews
Publisher Logo