The novel is essentially about Commander Vimes, but he’s not in Ankh-Morpork. He’s in Uberwald – with or without the umlaut. So, as I said, it’s odd.

The Fifth Elephant, as a former elephant, is also unusual in that he (or she) may or may not have ever existed. It’s more fun to think that he did though. After all, how else could you account for the vast amounts of fat under the ground around Bonk?

Don’t think too long or hard on that one.

Getting back to Vimes…who better to send as a diplomat to attend the crowning of the Low King of the dwarfs than – not Commander Vimes – Duke of Ankh-Morpork Vimes.

It’s interesting to watch how Vimes grows accustomed to the ins and outs of the vocabulary of diplomacy, especially after he meets Dee, the Ideas-Taster.

Politics is far from my favorite topic to read about or to talk about or to write about, so The Fifth Elephant – while still a very good story – isn’t my favorite Discworld novel. Obviously this doesn’t mean it won’t be or shouldn’t be or can’t be yours.

The first Igor we encounter is a resident at the Ankh-Morpork embassy in Bonk. He knows virtually everything that’s been going on there and lets our heroes in on a few secrets.

Lady Margolotta and Angua’s mother, Mme. Serafine Soxe-Bloomberg, each have their own Igor. Each serves a similar purpose of serving their respective families.

Finally, there’s a young Igor who has rather radical ideas, compared to other Uberwaldean Igor’s. This one eventually ends up as a member of the Ankh-Morpork Watch.

I guess you have to be there to really appreciate the differences among Igors – their voices, their statures, their walks, their stitching patterns.

I always appreciate the conversation – both audible and visual – between Carrot and Angua. Since you really can’t be there in person, Terry takes extra special care to convey the unspoken conversation that goes on between these two.

That Carrot “quits” his job in the Watch and goes after the missing Angua in the first place speaks volumes. In The Fifth Elephant, there’s the addition of a third party (and the cause for Angua leaving Ankh-Morpork) – Gavin, a wolf…not a werewolf, like Angua.

There is the strong implication that Angua has been as involved with Gavin as she has with Carrot. Unfortunately, since Gavin doesn’t survive to the end of the story, that relationship can’t survive either.

That’s probably just as well. I don’t think it would have been as interesting as the Carrot-Angua combination.

All Hail the Low King?

But isn’t The Fifth Elephant really all about the crowning of the new Low King of the dwarfs? Well, not really. I think that part of the story exists more to bring the other pieces together than anything else.

Yes, there’s a mystery there about what happened to the Scone of Stone, and the solution to that is pretty neat. But the revelation(s) about Dee and the new Low King are arguably more significant than the the crime.

Also, I have to think hard every time to remember if it’s the Scone of Stone or the Stone of Scone. Maybe that’s just age.

Get your own personal Fifth Elephant at Amazon today.
Summary 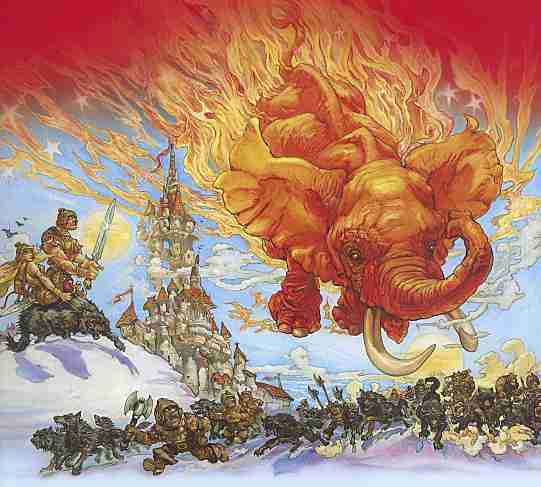