With this post, I’ll be wrapping up our discussion of The Colour of Magic, at least, for now.

Rincewind and Twoflower are the intended ritual sacrifices at the launching of the Potent Voyager, a spaceship designed by Goldeneyes Dactylos.

In my head, the Potent Voyager looks more like a silver* version of the Beatles’ Yellow Submarine than a Saturn V rocket.

Its launch is the occasion at which The Luggage finally catches up with Rincewind and Twoflower, who have changed from sacrificees to chelonauts. You may legitimately wonder if that’s a good thing.

In a slapstick comedy scene, Twoflower and the sea troll Tethis**, who earlier turned up inside The Luggage, get inside the Potent Voyager as it starts to roll down the track that will take it over the Edge of the Disc. Rincewind is stranded atop the craft. He goes over the Edge too, just not on the inside of the vehicle. The Luggage, following its owner to the end, or in this case, the Edge, goes over as well.

That’s what it says in the book: THE END. My copy then goes on with the story for the equivalent of 3 more pages.

I won’t tell you exactly how it ends because I can’t.

Because it doesn’t. Not really.

There are no more words after a while, but the story goes on. Its name changes to The Light Fantastic, Terry’s second novel in the Discworld series.

You’ve probably already guessed that Rincewind didn’t die. In fact, Death didn’t even come for him. He was busy in Pseudopolis, so he sent a substitute, Scrofula.*** As Rincewind says, “No-one dies of scrofula.”

The last we hear of Rincewind, Twoflower, Tethis, The Luggage, and the Potent Voyager, all are falling towards the tail end of the Great A’Tuin. Obviously there will be a sequel. If you want to (and I don’t know why you wouldn’t) follow me on to the rest of the story, get yourself a copy of The Light Fantastic and start reading.

We can’t leave Rincewind hanging…er…falling, can we?

*Even though it’s actually bronze.

**Perhaps. Terry actually says, “The troll disappeared.” He doesn’t say, “…into the spaceship.”

***In our world, tuberculosis of the neck. Really.

Get The Colour of Magic at Amazon here.
Summary 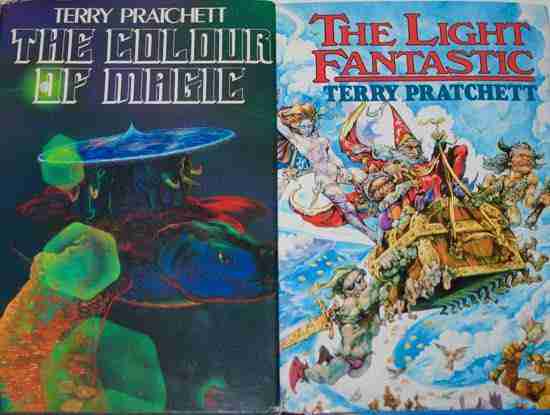 Article Name
The Beginning of the End of Discworld
Description
Here we make the transition from The Colour of Magic to The Light Fantastic.
Author
Gary Sonnenberg
Publisher Name
Narrativium Reviews
Publisher Logo