The Eight Orders of Wizards

In The Light Fantastic, we learn that there are eight Orders of Wizards, each with its own Head Wizard. As far as I can see, only six of these eight are explicitly named, and we never hear the name of the Head of one of those six.

Here are the six known Orders and Heads. (You can prefix most with “The Order of….”)

Presumably there is some close connection between #2 and #6, as both are concerned with the Unbroken Circle, but it’s doubtful that any of the members of these two Orders would ever admit it.

One other wizard deserves special mention here: Ymper Trymon, who is usually referred to by his last name alone. He is second in command to Galder Weatherwax and schemes (or sometimes simply attempts outright) to kill Galder and thus take over the Headship.

During the course of this novel, both Galder and Greyhald are eliminated. We can assume that the next wizards in line – Trymon and some unnamed lucky man – fill the top spots in the Order of the Silver Star and the Order of the Ancient and Truly Original Sages of the Unbroken Circle. (If I ever have to write the name of that Order again, I will call it the OotAaTOSotUC or perhaps OATOSUC, for short. Just so you know.)

Near the end of the story, Terry mentions that the “seven senior wizards” are atop the Tower of Art along with Trymon. This confused me at first. I think what he’s saying is that, even though Trymon is now an Order Head, he’s too young to be considered a senior wizard.

The Eight Spells of the Octavo

So everything has been leading up to the speaking of the Spells contained in the Octavo. According to Death,

“…ALL THE SPELLS HAVE TO BE SAID TOGETHER NEXT HOGSWATCHNIGHT OR THE DISC WILL BE DESTROYED.”

And he knows this because…

“IT’S AN ANCIENT PROPHECY WRITTEN ON THE INNER WALLS OF THE GREAT PYRAMID OF TSORT.”

At the end of the book, the Spells all do get spoken, but we never know if this actually happens on Hogswatchnight or not. I guess we can assume the timing was right because there’s a happy ending.

Trymon steals the Octavo, climbs the Tower of Art, and speaks the seven Spells the book still contains. Remember, one Spell is still in Rincewind’s brain. Eventually, he (Rincewind) speaks the eighth Spell, but nothing happens, even though everyone certainly expected something awesome and/or marvelous.

Bethan figures out that Rincewind must have mispronounced one of the words of the spell. He had said, “Zph.” It’s actually Twoflower who pronounces the word correctly as “Zsff”, and then something amazing does happen.

Sorry, no spoiler here. You’ll have to read the book yourself.

There are a few more small items I want to mention here before wrapping up (for now) my discussion of The Light Fantastic.

In The Colour of Magic, Terry used the phrase “as one God” [link] to indicate how the group of gods moved together. In this book, he uses the more common phrase “as one man” to show how the wizards ran up the stairs together. I appreciate the balance – intended or not – in the use of these phrases in the two books.

Another item is this great pune…As the rioters are trashing the shops in Ankh-Morpork, Bethan noted that some were even stealing musical instruments. Rincewind observes that they were probably luters.

The Octavo is “eaten” by the Luggage which, in turn, is given by Twoflower to Rincewind before the story ends. Isn’t that kind of ironic?

The reason that Twoflower gives up his Luggage is because he’s going home and doesn’t need it anymore. He says, “You haven’t really been anywhere until you’ve got back home.” This confuses Rincewind a bit, but I really like the sentiment. Think about it.

Finally, I just want to mention how this book got its title. The easiest way is to quote directly from the book.

“There was no real need for the torches. The Octavo filled the room with a dull, sullen light, which wasn’t strictly light at all but the opposite of light; darkness isn’t the opposite of light, it is simply its absence, and what was radiating from the book was the light that lies on the far side of darkness, the light fantastic.”

The next bit is deadpanly great.

“It was a rather disappointing purple colour.”

More than once in the Discworld series, Terry speaks of something “on the far side” or “all the way through”. I like how this makes your mind work to get his meaning.

*In Equal Rites, this guild is called The Ancient and Truly Original Brothers of the Silver Star. So there’s that.

Find your copy of The Light Fantastic at Amazon.
Summary 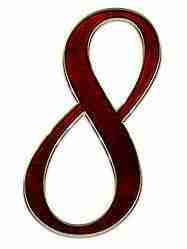