Bring i’ on, yon Kingey Ratt! We be nae backin’ doon!

The Amazing Maurice and His Educated Rodents is the longest title among the 41 Discworld novels.

And it’s not even close.

Most titles are from one to four words long, with A Hat Full of Sky being the exception. The average length is two words. Ten books (counting Eric – without the word Faust) have just one word. Seventeen have two words. Nine have three, and three have four.

The Amazing Maurice (for short) is also special in that – along with Pyramids and Small Gods – it’s a “one-off” movel. It doesn’t have another book in the “series” that it “fits” with. All of the others can be classified as Rincewind, Witches, Death, the Watch, the Industrial Revolution, or Tiffany Aching books.

Maybe that’s why the cover (of my copy, at least) says, “The Pied Piper of…Discworld?” Like the Piper, this story kinda goes off on its own. So maybe the question is this: Will you follow where he leads?

And who is he?

Perhaps more than any other novel, Terry makes this one about the Narrativium – and blatantly so. He introduces Malicia Grim (wonderful name, eh?) and her insistance on everything being part of the traditional story.

He also gives us Keith (no last name known, and even his first name is uncertain) who tries in vain to make Malicia see that this is real life, not a story.

There’s sort of a story within the story too. This is a chapter book (a rarity among Discworld books) that has a short quote from Mr. Bunnsy Has an Adventure at the start of each chapter. The Mr. Bunnsy book (which only exists, as far as I know, within The Amazing Maurice) is treated by the Educated Rodents as a work of non-fiction. They almost consider it their Bible and try to follow its “teachings” religiously.

So, what do I think of The Amazing Maurice?

If I recall correctly, I didn’t care for it all that much the first time I read it. As of this writing, I’ve now read it twice, and I liked it much better the second time. I think that I may not have fully understood the Rat King the first time around. It’s not a huge part of the narrative, but it really does help to know what the Rat King is capable of and is doing.

There isn’t as much artwork (by Kidby, for example) for this story, at least, not to my knowledge. (If you know of some good stuff, let me know.) Other than the cover art (above), the only items I’ve found worth showing are the rat writings shown within the pages of the book. This, too, makes this book unusual.

Here are a few examples of the writings.

All in all, The Amazing Maurice and His Educated Rodents is a good, but not great story. It’s definitely “a Pratchett”, but I wouldn’t put it at the top of the list as far as a must-read.

Get The Amazing Maurice and His Educated Rodents at Amazon.
Summary 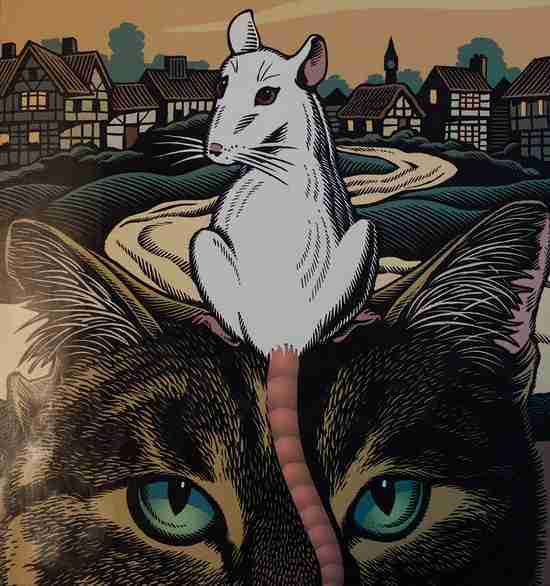