Just before I started writing this article, I decided to create a complete list of these metterfor posts in the Ideas section. If I haven’t moved it since, you can still find it there.

Now, moving right on to more metaphors in Equal Rites.

Page 61 – Hilta moved through the crowd like a slim snake through dry grass, her entire stall and stock reduced to a surprisingly small bundle on her back, and her jewellery rattling like a sackful of flamenco dancers.

Two for the price of one here. Likely the only place you’ve watched a snake (not a rake…see Page 11 item here) in the grass is on TV or in a movie or a video online. Even if you haven’t, you can imagine it. The snake-like Hilta weaves her way past all the people barely being noticed. And no magic involved.

Well, maybe I should retract the “barely being noticed” part because of the flamenco dancers.

So perhaps she barely touched anyone in the crowd but they heard her as she went by. Flamenco (which has nothing to do with flamingos, kids) dancing is like tap dancing on steroids. If you’ve never seen or heard such a dancer, watch the video below.

Page 62 – According to the standard poetic instructions one should move through a fair like the white swan at evening moves o’er the bay, but because of certain practical difficulties Esk settled for moving through the crowds like a small dodgem car, bumping from body to body with the tip of the staff waving a yard above her head.

Apparently Terry didn’t much care for the poetry of the day – or of the past, for that matter. This isn’t his only disparaging reference to it.

In America, I believe we would call Esk a bumper car – the kind you ride in at the carnival or fair where you try to crash into your friends or family, each in their own car, so as to make them hold their backs and walk funny when the ride is done.

Picturing a young lass being jostled by the crowd in this way is easy enough to do. It’s especially apropos (Does that need to be italicized?) in contrast to the Hilda description just above.

Page 62 – Esk, in fact, moved through the fair more like an arsonist moves through a hayfield or a neutron bounces through a reactor, poets notwithstanding, and the hypothetical watcher could have detected her random passage by tracing the outbreaks of hysteria and violence.

Terry’s not done with Esk yet.

We assume the hayfield is dry.

Poetry is on the defensive again.

Don’t worry…you’re not the only one who’s never seen a neutron in a reactor or elsewhere. Just run with it anyway.

Page 63 – With the staff still radiating random magic like a demon lighthouse she headed for it, weary but determined.

This simile is a bit more mysterious than most. A normal lighthouse exists to warn sailors of potential hazards and that they should keep their distance.

What would a demon lighthouse exist to do? The opposite?

In this case, probably, since it’s the wizard staff throwing out magic like a lighthouse beacon.

More than that I leave to you. Comment on this one at your own peril.

Page 66 – Esk looked at her gratefully, even while vaguely realising that the woman had a face just like an eager ferret, and nodded.

Fortunately, the woman didn’t actually turn into a ferret. (See the Pig Incident on page 54 here.)

I think ferrets are known for curiosity as well as nastiness. At least, that’s what I think Terry has in mind here.

Page 67 – It [the human head] is a railway terminus with all the Tannoys talking at once. It is a complete FM waveband – and some of those stations aren’t reputable, they’re outlawed pirates on forbidden seas who play late-night records with limbic lyrics.

Here we have one of Terry’s few British-specific references. Tannoy is a British manufacturer of loudspeakers and public address systems.

Your limbic system, according to those who know, is the part of your brain that deals with emotions (and memory).

Put all this together and Terry is trying to tell you – almost poetically, but not really – that the human mind is a real mess, at least, compared to the mind of an animal. That’s the point. For context, just read the book and thank me later.

Page 67 – Granny, trying to locate Esk by mind magic alone, as trying to find a straw in a haystack.

This is the very next paragraph that follows the previous metterfor.

You know that the usual metaphor is “needle in a haystack”. What Terry is saying is that finding a needle in a haystack would be a piece of cake compared to what Granny was attempting to do to find Esk. (Apologies for using yet another metaphor to explain the original one.)

Page 68 – If broomsticks were cars, this one would be a splitwindow Morris Minor.

Terry just couldn’t throw off his nationality in this section.

According to Wikipedia, the Morris Minor “was the first British car to sell over a million units and is considered a classic example of automotive design, as well as typifying “Englishness”.”

You’ve seen one but probably didn’t know the make and model. It reminds me of an oversized VW Beetle.

Not knowing exactly what the British in general and Terry in particular think of Minors, I can only guess that it has something to do with it usually moving “slowly and erratically”, since that’s how the broomstick moved in the previous sentence.

Page 71 – …the barge was passing between high orange cliffs now, banded with so many colours of rock it looked as though some hungry God had made the all-time record club sandwich….

I love a good club sandwich. Look at one from the side and you’ll get an idea of the scenery that Esk saw here.

Page 71 – But it [a thought] persisted, arriving in her mind like the unexpected limbo dancer under the lavatory of Life.

Wow! This is one of those where you just have to think, “Where did he get that from?”

To have anyone appear in the lavatory while you’re using it is surprise enough – but for it to be a limbo dancer! Oi!

Page 72 – The sky was bluer than a biscuit barrel, fitting neatly over a broad valley through which the river ran as sluggishly as a planning inquiry.

Biscuit barrels (jars, crocks) don’t have to be blue but apparently most of the ones Terry was familiar with were.

I wonder if Terry had ever been on a planning committee. At the very least, he must have come into contact with one (hopefully no more than one), if only via the daily news, somewhere along the way.

I hope you and I never have to experience such slowness.

Page 72 – Behind her the Ramtops still acted as a hitching rail for clouds….

In the pre-Morris Minor days, when horses were the most advanced form of personal transportation available, hitching rails (posts) were not uncommon. You hitched (tied) your horse to one outside the general store or the chemists or the saloon while you went inside to make the corresponding type of purchase.

So the clouds seemed to be temporarily attached to the mountains in the distance.

That’s all for this segment of the metaphor in Equal Rites. 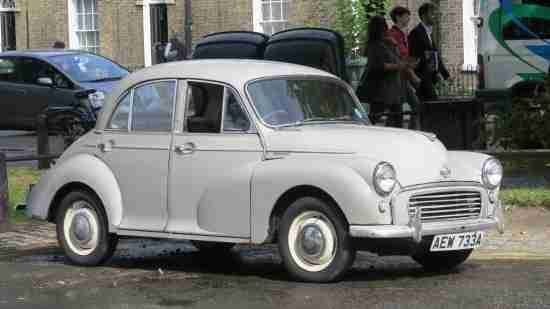