Terry really stuffed an awful lot of Roundworld musical references into Soul Music. Some of them are fairly obscure, but most you’ll recognize – even if you don’t know the details – whether you’re a musician or not.

I’m not going to cover them all here. (I may have missed some myself.) These are some of my favorites though.

The hero(?) of the narrative is Imp y Celyn, by birth. Later, he changes his name to Buddy. Since you know this book is about music – from the title itself, if nowhere else – your thoughts should automatically jump to Buddy Holly here.

And your thoughts would be completely justified in doing so. Imp y Celyn translates (generally from Welsh) to “bud of the holly”. So obviously Terry wanted you to think of Mr. Holly from the get-go.

That said, Imp / Buddy is repeatedly noted for looking elvish. Drop the “h” there to see the other rockstar reference. His onstage actions make this comparison valid.

One of Buddy’s band mates, Cliff, says, as he helps to “borrow” a piano, that they are on a mission from Glod. Now, if you don’t immediately recognize this one, you can be forgiven, but then you must watch the 1980 movie, The Blues Brothers, at your earliest possible opportunity – or tomorrow, whichever comes first.

There is a Musicians’ Guild in Ankh-Morpork because…of course there is. One of its recruiting officers is named Satchelmouth Lemon. Louis Armstrong acquired the nickname Satchmo which is a shortened version of “Satchel mouth”. Combine that with Blind Lemon Jefferson, another blues artist, and you have the origin of this character’s name.

An important piece of the plot in Soul Music is that Death is having an existential, so to speak, crisis. Speaking to his servant, Albert, he says, “WHAT’S IT ALL ABOUT [,Albert]?”* This should bring Dionne Warwick to mind as she sings, “What’s it all about, Alfie?” If it doesn’t, please return to the 1960s immediately.

The Dean of Unseen University becomes quite rebellious in this story. That, in itself, should remind you of someone – perhaps yourself. At one point, he’s called a “rebel without a pause.” And…”He said, much later on, on the day when the music died….”

Then there are the various song titles scattered throughout the book. I don’t think any of these need further comment.

Jimbo, Crash, Noddy, and Scum have a lot of names for their band. My favorite is The Surreptitious Fabric. But when you speak their names together (as in two sentences back) they sound like CSNY to me.

Brother Charnel is the most famous horn player ever. “Everyone knows that. He stole the altar gold from the Temple of Offler and had it made into a horn and played magical music until the gods caught up with him and pulled his – “ Brother Charnel could thus be described as a felonius monk. Jazzists saw that one coming, yesno?

This one took me a while, but I think I figured it out. There’s an open box on the floor. This type of box could store music for playing back later. “Some time later a small greyish brown mongrel dog, on the prowl for anything edible, limped into the workshop and sat peering into the box for a while.” I believe this is a quiet reference to the Victrola dog listening for his master’s voice.

As I said at the top, there are a bunch of musical references in the novel. Dozens. Maybe even hundreds. Some people have tried to accumulate them all in an L-space-ish area. You can search out more of them there, if you’re so (musically) inclined.

Other Interesting Items I Found in Soul Music

“Susan hated Literature. She’d much prefer to read a good book.” Totally with you on this one, Susan (and Terry). I strongly disliked Literature classes all the way through school. I’m glad you don’t have to analyze a good story to death to enjoy it. (No, I’m not doing that here. This is for fun and profit.)

Death tries to forget (everything) by looking for the magical river, then joining the Klatchian Foreign Legion, then getting drunk. These are not random attempts. All these ideas were actually suggested to him by the holy man he had visited earlier.

We know that Death appears at the deaths of significant people…and wizards. Why doesn’t he have to show up for the average human or dwarf or troll or [insert species here] when their lifetimer runs out?

We get a sketch of an explanation when Susan is on duty for her grandfather.

“She didn’t have to…do…all of them. Albert had tried to explain, but a memory had unfolded anyway. She just had to do some, determined by timing or historical importance, and that meant all the others happened; all she had to do was keep the momentum going.”

A discussion of what the Listening Monks are trying to accomplish goes a long way to describe the source of the music in Buddy’s guitar.

“There was certainly, they say, a very strange noise at the beginning of everything.

“But the keenest ears (the ones who win most at poker), who listen to the frozen echoes in ammonites and amber, swear they can detect some tiny sounds before that.

“It sounded, they say, like someone counting: One, Two, Three, Four.

“The very best one, who listened to basalt, said he thought he could make out, very faintly, some numbers that came even earlier.

“When they asked him what it was, he said: ‘It sounds like One, Two.’”

Near the end of the novel, when some of our heroes are in a kind of limbo…

“There was the sound of faint footsteps far away in the darkness. They approached, slowly and deliberately. And stopped.

“Then the footsteps went back into the distance.

“After a while, another voice said: One, two, three, four –

“And the universe came into being.”

Have you ever been to a rock concert? The Listening Monks appear to have got it right.

Ponder Stibbons explains to Archchancellor Ridcully that his computer might work. Currently it has ants inside that do much of the computation. “Well, we think it might be able to do quite complicated math. If we can get enough bugs in it.” I know how to program computers. I laughed out loud when I first read this.

Trivia question: To whom was that line first spoken?

*Update: After returning to Mort, I see that Death asked a similar question – “What is it really all about?” – of the owner of the Mended Drum.

**Which were made of crepe.

Add some soul to your soul. Get Soul Music at Amazon.
Summary 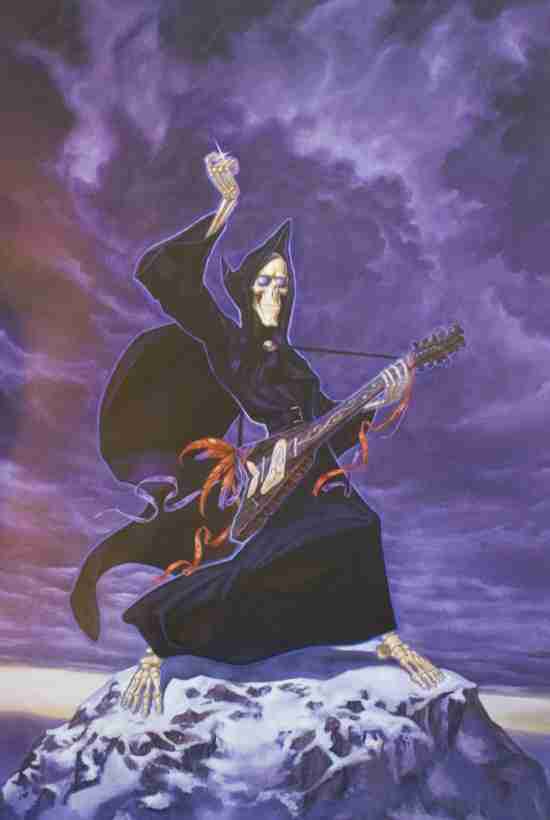