By my count, there are 85 characters mentioned – even if only in passing – throughout the pages of Small Gods. You’ll find only 6 of these in earlier Discworld novels – Xeno, Ibid, and the Tyrant of Ephebe in one, Blind Io in six, Offler the Crocodile God in eight, and Death in all twelve.

While this doesn’t match the number of new faces in Men at Arms (and perhaps other books that I’ll find out about later), it’s still more than a handful – even a troll-sized handful. So let’s take a quick look at these new folk and try to see how their narrativium holds things together.

We’ll tackle them in groupings, largely according to occupation. Some could fall into more than one group, but I’ll only include them in the most popular.

First are the Bishops. We have these four.

Bishop Drunah is secretary to the Congress of Iams – a humble enough position, until you remember that many of the members of the Congress are nearly deaf, so you can put what you bloody well like into the Minutes of their meetings.

One of the few events the Year of the Lenient Vegetable will be remembered for happened when Bishop Kreeblephor converted a demon by reason alone. There are few who have enough reason to convert themselves, much less someone else, still much less a demon.

Bishop “Deathwish” Treem is the Archivist of the Citadel in Omnia. He didn’t really have a deathwish. Others conferred that title upon him – for good reason.

And then there’s the Most Holy St. Bobby, aka Ossory’s Ass, who had bishopness conferred upon him simply for being in the desert with said prophet. Ass, in this context, has a literal, if nearly archaic, meaning. He was a donkey.

Small Gods’ Brothers (and a Sister)

There are these half a dozen Brothers in the story.

Brother Murduck was Vorbis’ pawn. Sadly, he failed to convert any Ephebeans and was harshly treated by them – though not so harshly as by the Omnian Quisition, as you might expect. Vorbis used him as an excuse to attach Ephebe after claiming that it was the Ephebeans who had killed him.

Brother Nhumrod could be classified as a bit of a sicko, so I won’t go into detail about his life. He was Brutha’s Novice Master.

Brother Preptil is simply known as the master of music – something which Brutha was the opposite of.

Brother Sasho used to be the personal secretary to Vorbis, but his belief in a flat world led him to an acquaintance with the Quisition.

Brother Whelk taught Comparative Religion. However, what can you compare to the One True Path of Om and live?

Brother Zephilite hails from Klatch where he does charity work for the invisible (note that this quality had to be noted) god F’rum.

Finally, we get to the only lady in the bunch, Sister Sestina. She lived in Quirm and was mostly known for walking on coals and having a philosophy of sensible ethics. So yeah…she was fairly boring as Discworld characters go.

There may have been more, but only two are named – Cusp and Vorbis.

Deacon Cusp is an Inquisitor. (See Murduck and Sasho.) He is crushed to death by the “Breath of God” with the help of Urn. The details and back story are too much to go into here. (See Small Gods.)

As you should expect, there are many gods – great and small – mentioned in Small Gods.

Here, I will only comment on 2 gods – Fedecks and Foorgol.

Fedecks is probably my favorite name for a god. If you’re still wondering why he’s included here and why I appreciate his name, say it aloud.

Foorgol may also be the god of palindromes. “Log Roof”. It kinda fits with avalanches, yesno?

Most of these “Philosophers” are Ephebean and most are also not strictly philosophers. It seems that, if you could write, you could philosophize. That said, you can usually tell what a writer’s philosophy is from the title of his most famous work. In the list, I’ll mention said opus as appropriate (and sometimes even when it’s not).

Now, I don’t know Greek – okay, I’ll say it…it’s all Greek to me (happy now?) – but I think I understand how these Greek/Ephebean names are supposed to be pronounced, so let’s start there. (It doesn’t matter for some of them.)

If it were just English, Coaxes would sound like coaxes, as in, “He coaxes me into thinking that would be a good idea.” But since it’s not plain English, it must be coh-AKS-eez.

Gnormally, I’d say the “G” in Gnomon should be silent, but I’m gnot so sure in this case. I’m thinking that gno one in that time and place was certain. Maybe even Gnomon didn’t gknow. Yesgno?

Didactylos (literally, two fingers) is a conglomeration of the Roundworld’s Diogenes, Plato, Archimedes, and Aristotle. Wow! Can you imagine all of those beings actually rolled into one? Translated, his work means The Turtle Moves – important to the story.

Gordo and Irexes are connected like this. Gordo said that sand was worn-down mountains. Irexes noted that sandstone was pressed out of sand suggesting that the grains were the fathers of mountains. And around and around they go.

Though those last two were both false prophets. The others are the SeptArchs who wrote the seven books of Omniaism. Can you name them? (I’m sure Brutha could.)

If you don’t count religious-political rulers, like Vorbis, there are these three who generally fall into this class.

The only item worth mentioning here is that the Tyrant was elected anew every five years. (Think about it.)

The first two are the sailors.

Sergeants Fergmen and Simony have the most important roles in the story. Sadly, we only learn Private Ichlos’ name from Death.

Surely Mr. Dhblah is related to C.M.O.T. Dibbler in Ankh-Morpork. (Or is he the one and the same?)

There’s not much else to say about the rest. Mrs. Quoom’s husband is in the last list below.

I find it extremely interesting that the arguably two of the main characters in this story only fit in the Misc. category – Brutha and Urn.

For most of the story, Brutha (who is never Brother Brutha, by the way) is the only one who believes in Om, who is currently a small tortoise – thus, one of the meanings of De Chelonian Mobile. Brutha essentially becomes the hero by the end of the book. And yet, as noted, he’s just a Misc. here.

Urn, while technically a philosopher, is more of an engineer than anything else which is why I didn’t include him in the same group as his Uncle Didactylos above. I suppose, by a similar argument, you could pull Didactylos himself out of that bunch, but Iam not going to change it now.

Want the rest of the story? Find Small Gods at Amazon.
Summary 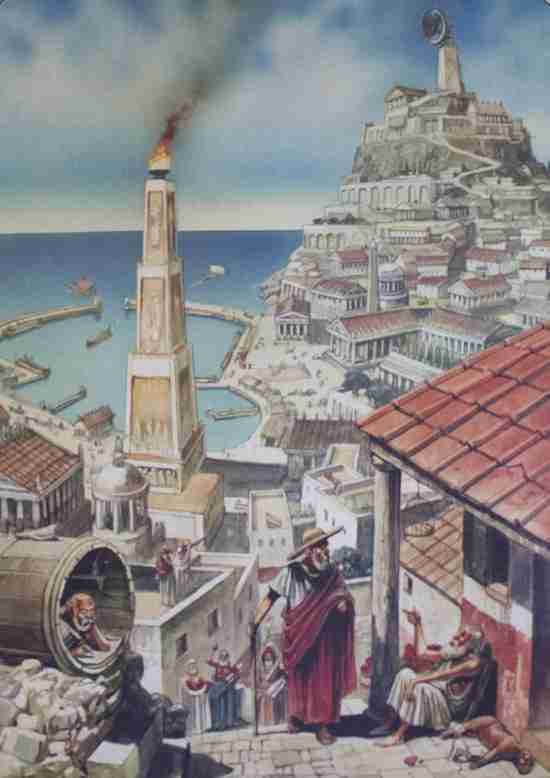