Twoflower either literally has four eyes, or he wears glasses. Terry was okay with either interpretation. Now we learn that he also has dentures, or “din-chewers”, as Cohen the Barbarian calls them. He’s not in tip top shape for someone who doesn’t seem all that old. Then again, my mother had both of those aids most of her life too.

In this section of The Light Fantastic, we also discover that other characters can understand Twoflower without the aid of Rincewind as translator. I guess that crutch was just too hard for Terry to keep working with, so he silently dropped it.

Those facts don’t have anything to do with this next bit.

Herenna (look at a properly designed book jacket for a full description of her – like the one above), hired by the nasty wizard Trymon, captures Twoflower, Cohen, Bethan, and the Luggage. How she and her crew of mercenaries managed the feat is pretty amazing – especially of the Luggage – and especially of Cohen.

Cohen got tagged in the back of the head by a slingshot. He admits later that he should have been paying more attention to things. But how they managed to subdue the Luggage is incomprehensible, except for the fact that they did it.

ASIDE: Since it’s found within this section with all the other action going on, I have to mention this here. Terry uses the phrase “rich as Creosote”. That’s one of my favorite of his punes. Now back to the action.

After the gang – just Rincewind, Twoflower, and Bethan at this point – escapes*, with the unwitting help of Old Grandad the nearly-dead troll, they suddenly encounter “one of those shops. This one is called…

Shops such as this are magical and are also known as tabernae vagantes – the roaming bars. For some reason, Terry mixes the idea of a shop with a tavern here. It all works out in the end. Just don’t think of these places as pubs, and you’ll be fine.

There is an interesting section that describes three possible theories as to how these shops could have come into existence – all of which are “completely and utterly wrong.” Sadly, Terry never tells us the correct answer.

Here is the longest and best (IMHO) explanation.

“Many thousands of years ago there evolved somewhere in the multiverse a race whose single talent was to buy cheap and sell dear. Soon they controlled a vast galactic empire or, as they put it, Emporium, and the more advanced members of the species found a way to equip their very shops with unique propulsion units that could break the dark walls of space itself and open up vast new markets. And long after the worlds of the Emporium perished in the heat death of their particular universe, after one last defiant fire sale, the wandering star-shops still ply their trade, eating their way through the pages of spacetime like a worm through a three-volume novel.”

It just dawned on me why DiscworldEmporium.com is so named. Duh!

A brief note about the third theory. It mentions the “Sunday Closing acts”. These were a set of laws that forced pubs (public houses) in Wales to close up shop on Sundays. Apparently this did nothing to affect the amount of drunkenness that occurred on that day. Notice that this refers again to tabernae, not to shops a such.

These shops appear, seemingly and probably out of nowhere, at a place where there was formerly a simple brick wall. While in one of those shops, Rincewind asks the owner for a glass of water. “First no money, then they want a glass of water,” complains the shopkeeper.

“Time is money,” she [Bethan] hissed. “I’ll give you thirty seconds to get him a glass of water.”

Terry mentioned multiverses just above. He also suggests this idea when the shopkeeper gets out his “map” of universes so he can find the one in which the Disc resides when it comes time to take the gang back home.

This reminds me of the Total Perspective Vortex in Douglas Adams’ The Restaurant at the End of the Universe. It was a torture device intended to drive you mad. It had a microscopic dot on a microscopic dot that said, “You are here” while showing you the entirety of the universe.

I wonder if this is why our heroes were in the Vortex Plains.

Finally, while explaining how he came to be in one of those shops, the shopkeeper says, “My father always said, he said, Do not peddle in the affairs of wizards.”

I knew the original quotation said “meddle” instead of “peddle”, but I had to look up the source. It was Tolkien in The Fellowship of the Ring.

Of course it was.

*I’m skipping a fair amount of text here, including the scene where “Dahoney speaks”.

You can get The Light Fantastic at Amazon here.
Summary 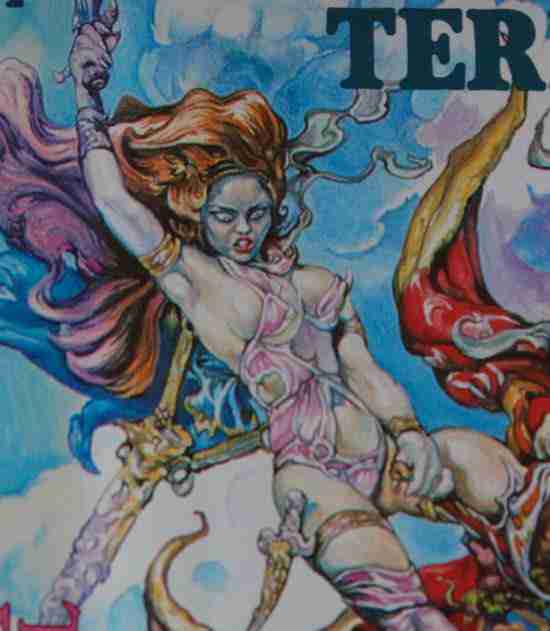