I’ll be honest. The first time I read Moving Pictures, I’m pretty sure I didn’t “get it”.

My second reading was probably done more slowly, and I had some idea of what to expect, so I guess I “got it” this time. I think my problem the first time around was that there’s no real villain involved. The “bad guy” is at most a spirit…more of a feeling than anything else. It’s the spirit of Holy Wood.

Which was probably Terry’s point.

I’ve been struggling for days trying to decide what else to write about in this review. I think that’s mostly because I don’t have any really strong feelings about it. I enjoy the story and the characters, and I love the humor that Gaspode adds to the mix. There just doesn’t seem to be anything that sticks out like a sore thumb (in a good way) that I want to tell you about.

Maybe my problem is partly due to the fact that there isn’t a larger-than-life character in the story. And obviously I’m not referring to the big lady on the silver screen here either. It’s true that C.M.O.T. Dibbler has his day in the limelight, but by the end of the tale, he’s just good ol’ Dibbler again, hawking his sausages innabun.

This book has more of an ensemble cast. Yes, there’s also Victor, but he’s an actor and so almost doesn’t count as a real life hero of a novel. He’s a hero of a different kind. He’s not the most memorable guy. I would be hard-pressed to name him if you asked me in a few weeks whom this book was about.

So again, I’m back to the ensemble cast idea. The wizards are there, including the Librarian. Dibbler and his crew are there. Victor, Ginger, and their supporting cast are there. Gaspode and his animal friends are there. You need all of them to tell the story, but no one is much more important than another.

Except for the scenes with the wizards, the plot doesn’t take place in a well-known location like Ankh-Morpork. It happens, of course, in the fake place known as Holy Wood. Obviously, that’s an important fact, but since Holy Wood isn’t a character – well, almost, but not quite – even that set(ting) doesn’t take center stage, so (not) to speak.

Though several important books – the Necrotelicomnicon, the Octavo, and The Book of Tantric Sex…among others – are mentioned almost in passing, none of them has a leading role as some of them do in other of Terry’s stories.

And I couldn’t identify any brand new (significant) ideas in Moving Pictures. That’s not automatically a bad thing, just noteworthy…if only briefly.

So, while I think you’ll enjoy this book, especially after a second reading, I can’t recommend it as one of Discworld’s best. That said, your mileage may vary, and you may even totally disagree with me. And that’s fine…as long as you do give it a shot in the first place.

You can get your copy of Moving Pictures from Amazon here. 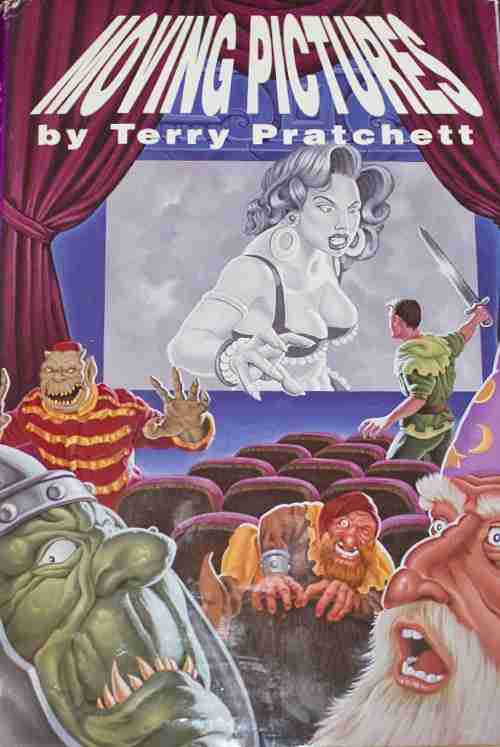