We dinnae nede nae stinkae gonne! We hae got swords!

Even though the setup had been there, the first time I saw the word “Ennogeht” I thought it was probably something related to a German form of movement. Then, about the same time Terry showed me the reversal – T-h-e-g-o-n-n-e – I realized what Cuddy discovered (I think)…that it was another case of Leonard of Quirm writing backwards as he was wont to do.

I remember also incorrectly thinking for a time that the Gonne was a pistol. Apparently I had missed the first hint of a description of it when Edward d’Eath “found that it seemed to fit his arm and shoulder very snugly.” Being on the same page of Leonard’s book as a bunch of crossbows should have been a clue too. So yes, I guess I was clueless back then.

Terry gives the Gonne a sapient quality – sort of like the Luggage. It even seems to speak to its owner(s). For example, there’s this exchange between it and Cruces.

“They say it was only a beggar girl in the Guild.”

Well? What of it? She was a target of opportunity. That was not my fault. That was your fault. I am merely the gonne. Gonnes don’t kill people. People kill people.

“You killed Hammerhock! The boy said you fired yourself! And he’d repaired you!”

You expect gratitude? He would have made another gonne.

“Was that a reason to kill him?”

Certainly. You have no understanding.

At that point, Cruces wasn’t sure if it was just his own voice inside his head that was talking to himself or if it was the Gonne. In later “conversations”, it really seems to be the Gonne doing the talking.

In the Roundworld, we know that guns can’t talk and that people do kill people. On the Disc, who knows?

The Captain Is Gone! Long Live the Captain!

So Captain Vimes of the Night Watch is about to retire…throughout most of the book.

Who will replace him is a major question. Carrot seems the logical choice, but he’s also on his way to becoming King of Ankh-Morpork, if Edward d’Eath has anything to say about it.

Fortunately(?), d’Eath doesn’t last long enough to get his way, and later Carrot himself buries the idea – quite literally.

Just when you think Vimes is going to be pushed aside, he is resurrected, so to speak, as the Commander of the entire Watch – Day and Night. Carrot does become the new Captain, but he’s still under the new Commander Vimes…which is as it should be.

The more things changed, the more they stayed the same.

Vimes is still head of the Watch, even though he’s now married to Lady Sibyl Ramkin – and is thus possibly the richest man in Ankh-Morpork. Angua died but didn’t stay that way – for which Carrot is very appreciative. And Gaspode is roaming the streets – following a temporary state of enclosure – as usual.

“On the whole, he reflected, it could have been a lot worse.”

Find your own copy of Men at Arms at Amazon.
Summary 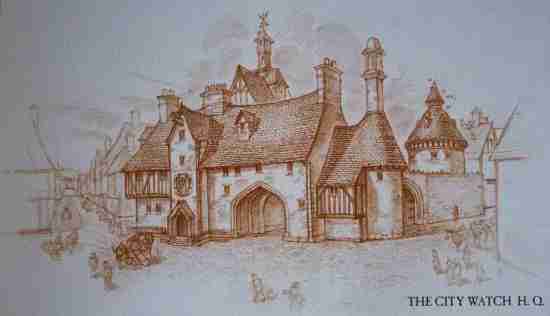