You can read almost every Discworld book without any prior knowledge of what’s in any of the other books in the Discworld universe – with the exception of The Light Fantastic, which is basically The Colour of Magic, Part 2.

You can read Interesting Times on its own too, but it really does help to know the history behind it, especially when it comes to Rincewind, Twoflower, and Cohen the Barbarian. To get that history, simply read The Colour of Magic and The Light Fantastic.

Interesting Times to Be a Shogun

I would have at first placed the setting of Interesting Times in ancient China – largely because of the wall around Hunghung, captial of the Agatean Empire. But when you think about it, Japan makes more sense. And apparently there’s a story that I haven’t read and only know from its title (from back in my high school days) that could easily have been the source of inspiration for much of this story. That story is Shogun by James Clavell.

It’s interesting too that Mr. Clavell translated Sun Tzu’s The Art of War. But Sun Tzu was Chinese, so maybe Interesting Times is sort of an amalgamation of the Japan and China of old times.

What’s in a Number?

Twoflower (or Two Flower) and Nine Turning Mirrors got it all started in The Colour of Magic. The pattern (with exceptions) continues in Interesting Times.

In order of appearance…

If you look through that list carefully, you’ll notice – not surprisingly – that there are no characters who have 7A as part of their name. That has to be intentional on Terry’s part, yesno?

In case you were wondering (and why wouldn’t you be?), about the actual distribution of the numbers, including both Mr. and Mrs. Twoflower as well as Nine Turning Mirrors, it is as follows.

If you require a line, bar, or pi graph, you’ll have to create your own. I look forward to seeing your best effort.

On a related, if tangential, note, when we first met Twoflower, it was unclear as to whether he literally had four eyes or whether he wore glasses. That point is clarified in Interesting Times. He wears glasses, making the earlier artwork of him with a line of four eyeballs an error.

Have Interesting Times of your own at Amazon. 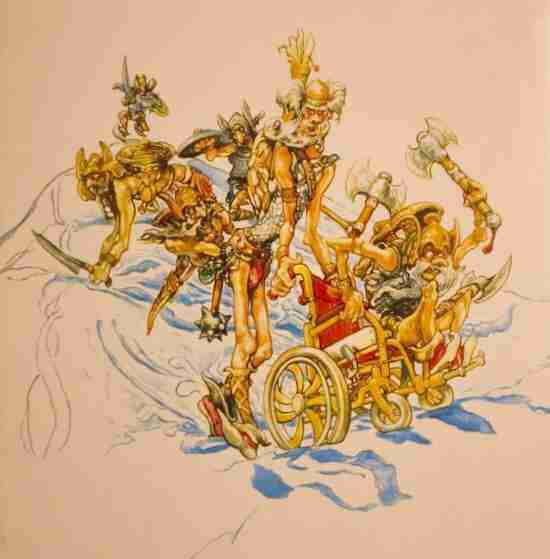