Being largely about time, Thief of Time has some bits that are difficult to picture and to understand, even though Terry tries his level best to let you inside his head. It’ll probably take you at least two readings to wrap most of your head around what’s going on.

But it’s worth it.

In addition to introducing us to the concepts of the History Monks and their Procrastinators, Terry has something to say that could be said in just about any of his novels and at just about any time. I find the following quotations apropos to our present day, based on what I have learned over the past two years or so.

“Y’know, most of what you get taught is lies. It has to be. Sometimes if you get the truth all at once, you can’t understand it.”

“The world changed mightily, and within a few days humans considered it was normal. They had the most amazing ability to shut out and forget what didn’t fit. They told themselves little stories to explain away the inexplicable, to make things normal.

“Historians were especially good at it. If it suddenly looked as though hardly anything had happened in the fourteenth century, they’d weigh in with twenty different theories. Not one of these would be that maybe most of the time had been cut out and pasted into the nineteenth century, where the Crash had not left enough coherent time for everything that needed to happen, because it only takes a week to invent the horse collar.”

Understand that the “Crash” spoken of here is just a part of the story of The Thief of Time and not anything to do with the roundworld stock market. Still, the basic idea could easily fit into roundworld “history”.

Think about it. With one important exception – your Bible – consider the implications of everything else you’ve been taught being a lie. I’m not saying it all is, but what if…?

The antagonist – though you don’t refer to them as individuals – in this story is the multitude of Auditors. These characters (which they are in more than one sense of the word) would like nothing better than to see the demise – or at least the stoppage – of the entire population of the Disc.

To that end, they scheme to get the Glass Clock built for a second time. (It almost worked the first time many years ago.)

Among the several protagonists are the Four Horsemen of the Apochralypse – Death, Famine, Pestilence, and War.

But wait! There’s a fifth rider! One who was one of them before they were famous. He goes by the name of…Ronnie Soak? (It’s almost surprising his first name isn’t Pete.)

Well, yes, that’s his nom de plume, so to speak. Originally, he was known as Kaos. (See the similarity to Soak?) Kaos believes in the complete absence of rules, of the Laws. Since the Auditors are the Laws, it’s no surprise that he is willing to fight against them.

The Horsemen don’t eradicate all the Auditors, nor do they tackle them all on their own. Susan Sto Helit, Jeremy / Lobsang, and others do their part as well.

In the end, it’s not so much that Good wins over Evil as people (of all types and races) win over non-people. I suppose you could argue that that’s still Good over Evil.

I wrote the paragraphs above about Thief of Time and for some unknown reason thought I was done with the book.

I always had in mind to write what follows. Time just got away from me or wasn’t on my side or some such truth from the Way of Mrs. Marietta Cosmopolite.

From page 1 (actually page 5 in my copy) of Thief of Time, Terry gives us what I can only assume is his own view on the concept of time – whether Discworld or Roundworld.

Wen the Eternally Surprised got his name because of his conception of time. He said, “In the cup of the hand there is no past, no future. There is only now. There is no time but the present.”

Thus, every instant he was surprised by what he saw and experienced. Eternally. See?

Some…er, time ago, I came to a similar conclusion about time. I’m not the first; I’m not the only; nor will I be the last to think so. Part of the argument about time not truly flowing like an ever-rolling stream is this. If you can measure time, what’s the smallest amount of it that exists? After a few instants, you’ll realize that it’s infinitely small. So small that it could be said not to exist at all.

“But we have clocks that measure time!” you say. Do they really? Don’t they actually simply present a mechanical device that’s now in one position or state and now in another and then another and so on? Is that really measuring time? Sure, it’s handy for knowing when to show up at the dentist’s office, but that’s about it.

Think about it and change my mind.

Take a little slice of time to get your own copy of Thief of Time here.
Summary 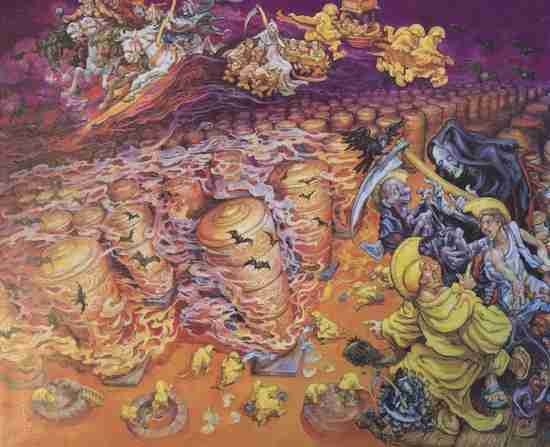