Ach, dragons! Bring ’em on! ‘Cos nae Feegle will say ‘Waily, waily’ if he but seez un.

The pig carcass took off from the spit and rocketed into the sky. (If it said anything, no one was close enough to hear.)

Thus our three heroes* – actually, more like 2 2/2 – find themselves in a highly magical field, due to the leftovers from the Mage Wars, at the beginning of the chapter The Lure of the Wyrm in The Colour of Magic.

The wyrms are imagined dragons. They originated (largely) from the mind of Liessa (sorry, no picture) in the place called the Wyrmberg – literally, Dragon City.

Not to put to fine a point on it, I think it would be quite…interesting to see Liessa “walking” upside down on the roof of the main wyrm cave in Wyrmberg.

Liessa has a brother named Lio!rt.

That’s not a typo.

“And I am Lio!rt Dragonlord,” said the hanging man, pronouncing the word with the harsh click in the back of the throat that Rincewind could only think of as a kind of integral punctuation.

That’s because it was.

Thank you, Terry, for explaining how to pronounce such a strangely-spelled name.

He doesn’t always help us out so clearly, of course. For example, how do you say, “Liessa”?

Is it the same as Lisa?

Does anyone, who sees her or pictures her in his mind, care? The correct answer is no.

It bugs me – and I know I’m not alone here – when authors (especially sci-fi authors) create strange names that normal, English-speaking readers have no chance at pronouncing correctly, for a given value of correctness.

Cthulhu comes first to mind. And while this one certainly isn’t the worst, it’s pretty bad, despite its popularity.

Think about it. It starts with a letter that isn’t even needed in the English alphabet. No, really, it isn’t.

Then it’s followed by a pair of letters that are never, ever paired with it (the C) in any other English word that you’ve ever heard of. Not even “chthonic” applies here. Is this really the best name that Lovecraft could come up with?

Getting back to names with ! in them, I think it’s hilarious that another Wyrmberg character is called K!sdra. If you try to say that one aloud, it must sound like you’re gagging.

I wonder what a name with a ? would sound like.

*Rincewind the wizard, Twoflower the Tourist, and Hrun the Barbarian** (plus The Luggage).

**I always imagine Hrun’s name being pronounced without the leading H. It’s never spelled out, but I think he acquired the name, not from his parents, but from his soon-to-be victims who would call out, “Hey! Run! The barbarian!” – or something equally plausible.

Find your own copy of The Colour of Magic here.
Summary 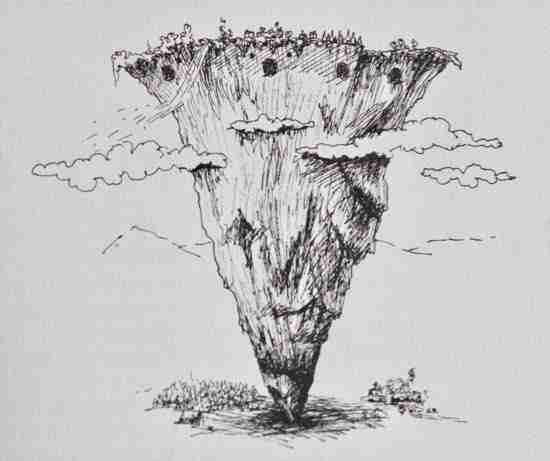