Hydrophobia. It’s just what you think it is – extreme or irrational fear of water.

On the Disc though, this extreme takes a slight twist. Instead of your normal irrational fear of water, a hydrophobe has an intense loathing of water.

Rincewind says that “the very idea of it revolts them.”

To get really good at loathing water – a strange concept in and of itself, a hydrophobe has to be trained on dehy…dra…ted…water….

Be that as it may (and it certainly may not be, considering Rincewind is the source), there is a transparent disc, or lens (think, Fresnel), heading towards Rincewind and Twoflower, skimming over and above the water due entirely to said loathing of a circle of hydrophobes sitting about its edge. The leader of the expedition is a girl of about 15 who, in addition to having command of the lens-craft, also has control of a silver rod called Ajandurah’s Wand of Utter Negativity. The stick can do utter negativity to the max.

And the girl has proven she knows how to use it.

Because she’s a wizard.

Well, that’s generally true on the Disc with just two exceptions that I know of. The first is this young lady named Marchesa. The other will be a more significant character we’ll discuss later from another book.

Other than these two, all magical, female humans are witches. There are many Discworld novels about the witches, so I won’t go into more detail about them here. Sorry, you’ll just have to wait.

With the aid of the hydrophobes, Marchesa takes Rincewind and Twoflower to Krull. That’s the last we hear of her, which is sad. I think she could have developed into an interesting character.

Once in Krull, our heroes learn from Guestmaster Garhartra – something of a wizard, or magician, at least, himself – that they are to be sacrificed.

Good to know things are back to normal for Rincewind.

I’ll skip some of the details so you can have the fun of discovering them for yourself as you read through this last chapter of The Colour of Magic. Suffice it to say that Fate has requested the presence of Rincewind and Twoflower at the sacrifice*, but the Lady has smiled upon them, giving them one chance** to survive.

Rincewind and Twoflower are captives but are treated as nicely as possible. Some of their captors are hydrophobes. When they make good their escape, one of the ways Twoflower combats them is by spitting at them.

I had to think twice about why that worked. Rather clever, don’t you think?

Meanwhile, The Luggage is having trouble keeping up.

He was on a ship that sank into the Garunna Trench. It’s okay to feel sorry for the unspeakable Thing that temporarily ate The Luggage in those murkiest of depths.

It’s also okay to sympathize with Terton, the lengthman on the 45th Length of the Circumfence whose hut The Luggage demolished. Terton likely enjoyed subsequent life in the Great Nef desert more anyway.

So The Luggage isn’t quite back with its owner yet, but it’s getting close. One can only hope for a reunion before the time of sacrifice.

*As guests of honor. 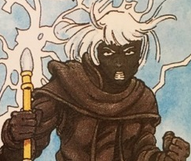 Article Name
Hydrophobia: The Good, the Bad, and the Ucky
Description
Rincewind and Twoflower and their dealings with Marchesa and the Hydrophobes.
Author
Gary Sonnenberg
Publisher Name
Narrativium Reviews
Publisher Logo