Let’s explore some of the main ideas that Terry inserted into Hogfather.

The Sun May Also Rise

It’s complicated. What does the Hogfather have to do with the sun rising in the morning?

The Hogfather used to be (and maybe still is) the winter god to whom people offered sacrifices. That is, they gave him stuff.

Now the Hogfather gives stuff to people instead. Go figure.

In any case, that still doesn’t readily explain why, if the Hogfather doesn’t exist, the sun won’t rise.

Those, at least, are Terry’s thoughts on those matters. Personally, I disagree with one or more of them.

Death Is a Nice Guy

“Death considered as an individual rather than life’s final curtain was someone she [Susan] couldn’t help liking, in a strange kind of way.”

I’m with Susan on this. Death is my favorite character. I wonder – because I haven’t really examined my own head in detail on this and why would I? – if this has anything to do with the fact that my eventual death will lead to my everlasting life in heaven.

WE MUST HURRY. THERE IS NOT MUCH TIME.

“I thought you always had time. I mean…whatever it is you want to stop, you can go back in time and – “

“You’ve done it before…”

THIS TIME IT IS OTHERS WHO ARE DOING IT. AND THEY HAVE NO RIGHT.

THEY HAVE NO NAME. CALL THEM THE AUDITORS. THEY RUN THE UNIVERSE. THEY SEE TO IT THAT GRAVITY WORKS AND THE ATOMS SPIN, OR WHATEVER IT IS ATOMS DO. AND THEY HATE LIFE.

IT IS…IRREGULAR. IT WAS NEVER SUPPOSED TO HAPPEN. THEY LIKE STONES, MOVING IN CURVES. AND THEY HATE HUMANS MOST OF ALL. Death sighed. IN MANY WAYS, THEY LACK A SENSE OF HUMOR.

IT IS THE THINGS YOU BELIEVE WHICH MAKE YOU HUMAN. GOOD THINGS AND BAD THINGS, IT’S ALL THE SAME.

Ron and the Gang

Meet the Hogfather at Amazon.
Summary 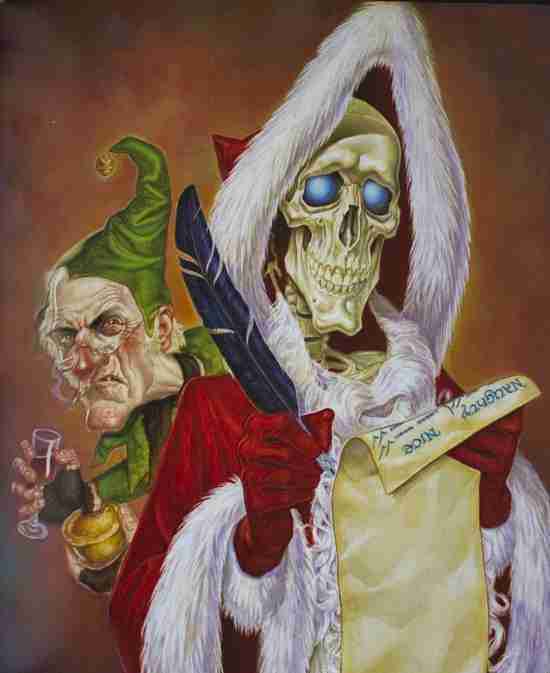