From time to time, Terry likes to play with the sounds of words. Twoflower has the honor of speaking the first pun in the Discworld series. He tries to explain insurance to Rincewind. Terry tells us that, since Rincewind has no idea what insurance is, what his ears hear is inn-sewer-ants. In other words, he interprets the new word as closely as he can using words he already knows. Later, Twoflower expands on this concept by telling him about an inn-sewer-ants-polly-sea. (It’s 2 words; just say it aloud, if you really need to.)

Near the end of their discussion, Twoflower mentions reflected-sound-of-underground-spirits. This isn’t quite the same kind of wordplay as inn-sewer-ants. Here, it’s the meanings of the phrases that matters at first, not the sounds of the words. After you decipher the phrases, then you combine the sounds.

This one actually stumped me until I read the explanation that you’ll find later in The Colour of Magic. I figured out right away that reflected-sound was echo, but I didn’t know what to make of of-underground-spirits.

It’s not Terry’s best pun because 1) not everyone will know which spirits he is relegating to the dirt and 2) even if you understand the meanings, the combination of resulting sounds is a bit of a stretch to make the intended word.

I won’t keep you in suspense, in case you haven’t figured it out yet. The spirits in question are gnomes. So you have to interpret the phrase of-underground-spirits as gnomics. Thus you arrive at echo-gnomics or economics.

See? I told you it wasn’t one of his best. In fact, I’d feel safe in calling it his worst. And I don’t mean that in a good way. Usually the “worst” puns are the “best”. Not in this case.

A Quarter-Rhinu Makes the Disc Go ‘Round

Twoflower is becoming more and more popular with the townspeople of Ankh-Morpork as he uses a recent invention, the iconograph, to take pictures around the city.

He is such a gracious Tourist that he thanks those he takes pictures of (“for their trouble”) by giving them a quarter-rhinu gold piece. In many cases, that single coin was probably more money than the recipient had seen in his entire life.

The iconograph is an interesting gadget, not because it’s what we call a camera, but because of the way Terry makes it work.

There are no such things as batteries to power small devices like this. Everything (at this time) is purely mechanical. When you press the button on the black box, that sends a signal – perhaps a rap on the head – to the tiny imp living inside. It tells him that he should very quickly paint an accurate picture of what he sees through the “eye”; that is, the “lens”.

I love the inventiveness here. Not that someone on the Disc had invented a camera, but that Terry invented one that worked via an imp! Be on the lookout for more of this creativity as you make your way through the Narrativium.

You can get The Colour of Magic at Amazon here!
Summary 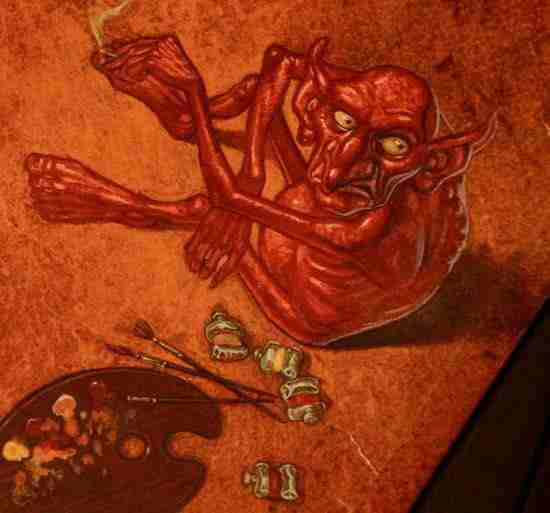 Article Name
Have I Got an Inn-Sewer-Ants-Polly-Sea for You!
Description
Insurance is a new concept that Twoflower introduces to Ankh-Morpork. So is the device called the iconograph.
Author
Gary Sonnenberg
Publisher Name
Narrativium Reviews
Publisher Logo