Who wud be wantin’ feets made o’ clayey? Sounds a wee bit tae stickey fer a Feegle.

Before I get into the nitty-gritty of Feet of Clay, there’s a minor aside I want to comment upon.

It’s really hard to find good artwork – at least, from the sources I have available – of some of the main characters who are special in this story. I don’t mean Sam Vimes, Angua, and some of the others who pop up throughout the series. I mean Dorfl, Dragon King of Arms, Cheery (Cheri), and the like.

So if you see some repetitive photos in this article, that’s why.

While Feet of Clay is really a murder mystery (Who killed Father Tubelcek and Mr. Hopkinson?), I think Terry may have had something else in mind when he wrote it.

I’m not sure he had the following question percolating in his gray matter, but considering some of the other big topics he covered in Discworld, I wouldn’t put it past him.

What constitutes a living being?

Now, obviously the humans, dwarves, trolls, werewolves, and so on in Discworld are living beings. The main question arises with the golems.

For those not familiar with what a Discworld golem is and how one works, let me explain. A golem is essentially a machine made of clay – thus one of the meanings of Feet of Clay. You can open its head, literally, and put a piece of paper inside with instructions about how it should do its job. This paper is called its chem. If there is no chem, the golem is just an unmoving lump – albeit a very big lump – of clay. With the chem, it acts like a machine, doing whatever it has been told to do forever, if you like. It doesn’t need to eat, sleep, or rest in any way. In this way, it’s much like a computer.

It’s just that a golem looks like a large human or perhaps a robot.

So is it a living being, like a human?

Commander Vimes and Captain Carrot seem to have the most to say about whether or not a golem is “human”. Vimes is more skeptical than Carrot, but neither one of them seems totally sure of the answer to that question.

For example, Carrot at one point says the following to the golem called Dorfl.

“If a golem is a thing then it can’t commit murder, and I’ll still try to find out why this is happening. If a golem can commit murder, then you are people, and what is being done to you is terrible and must be stopped. Either way, you win, Dorfl.”

I think Terry hadn’t quite made up his mind on the matter either. That’s why he penned the debates about it.

Perhaps this doesn’t seem like an important question to you in the roundworld right now. But it very likely will be at some point in the future, as robots become more and more human-like.

Maybe it’s time you started thinking about it. Others already are.

Will your answer agree with theirs?

Dwarf Bread – Not for Your Average Meal

The average person – and maybe even some dwarves – can’t take a bite out of dwarf bread. At least, not without losing a few teeth.

That said, it does last a good (so to speak) long time and can probably sustain you for just as long, assuming you can get it down.

Specialty forms of dwarf bread, however, have even become famous weapons.

In Feet of Clay, we’re introduced to this concept. (It may have been alluded to in earlier novels. I don’t remember just now.) The picture shows several forms of bread that can be used in a fight. I don’t think it’s specifically pictured here, but the Battle Bread of B’hrian Bloodaxe is a well-known weapon in most, if not all, circles (of any species).

I won’t give away the entire plot here, but in case you’re wondering what dwarf bread has to do with golems, let’s just say it’s tangentially related to the late Mr. Hopkinson.

Get your own personal copy of Feet of Clay from Amazon.
Summary 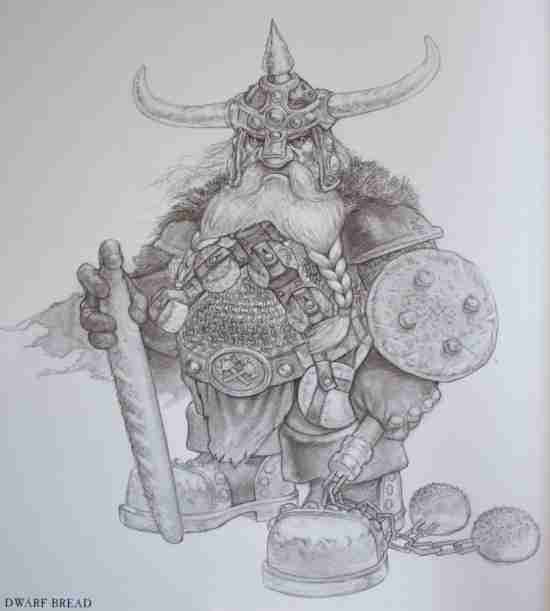