Weel! That Astfeegle isna any relation tae we Nac Mac Feegles, ye ken. Though he dae sound like one we could tak a likin’ tae.

My copy of Eric is the wonderfully-illustrated edition with the squiggly artwork done by Josh Kirby. On pages 24 and 25 (mostly on 25), we get to see Kirby’s rendition of one of the two main characters in this book – the demon Astfgl.

The other main character is the wizard Rincewind.

“What about Eric?” you ask. “Isn’t he a – or perhaps, the – main character? After all, the book has his name in the title.

Nope. Eric only exists so that Rincewind and Astfgl can get together…so to speak.

The book of Eric is loosely based on Faust. In fact, some editions even have the name “Faust” on the cover, which is crossed out and replaced with “Eric”, indicating that Eric is supposed to be the Faust character in the Pratchett version of the story.

While that much is basically true, it’s still also true that Eric plays second fiddle to Rincewind and Astfgl. (By the way, you can pronounce Astfgl any way you like. Call him Ronald, if that’s easier to say in your head.)

Rincewind and Astfgl interact throughout most of the story, but Rincewind doesn’t know it. He and Eric both are led to believe that Rincewind somehow has great wizardly powers and can thus fulfill Eric’s wishes.

Those wishes are pretty much the wishes you’d expect a teenage male (or an adult male) to make.

Not necessarily in that order.

Astfgl sees to it that, with a snap of Rincewind’s fingers, Eric, Rincewind, the Luggage, and Eric’s talkative (wossname) parrot are eventually transported magically to the Tezuman Empire, which is ruled by the Great Muzuma and which is home to one of Astfgl’s flunkies, Quezovercoatl.

I’ll call him Q for short. (At least 17 of you will probably understand why, even though this one isn’t related to the other one.)

Q is really just an imp who, in Astfgl’s opinion, has totally botched the job of demonizing amongst the Tezumen.

Terry does a decent job of making a farce of ancient South American kingdoms with ziggurats. One of my favorite items is that they have not yet invented the wheel, so muscular men carry the axles of a “carriage” to get the important person inside from place to place.

I’d love to see that live and in person.

Rincewind soon learns that the “Ruler of the World” will not fare well – to put it mildly – in the Tezuman Empire. With another snap of his fingers, Astfgl transports the group of adventurers in both time and space to a locale where Eric can meet the most beautiful woman in the world.

They end up inside the Discworld equivalent of the Trojan Horse in Ephebe. There they also find Helen…er, Elenor…but she’s…well, let’s just say she’s not quite what Eric had expected.

Even more interesting, though, is a hero they meet who’s named Lavaeolus.

Now, if you know your Latin, you might be able to decipher what his name means in English – or, at least, something close to an accurate translation.

Lav basically means to wash, or perhaps to rinse. Aeolus means wind. Put the two together and you kinda sorta get Rinse-wind. So yes, this just might be the wizard Rincewind’s ancestor.

After discovering all sorts of historical errors, our heroes leave for…

Staying one step, so to speak, ahead of Astfgl (without knowing they were doing so), Eric and Rincewind leave the creator behind and wind up at one of the gates of Hell. Meanwhile, Astfgl arrives at the newly-created beginning of the universe, which no longer contains Eric and Rincewind.

Terry’s version of Hell is one in which Astfgl has created an amazing sense of boredom to be experienced by all the residents. Along the way, we find several references to mythology, and we learn the names of several demons who are under Astfgl’s control.

In alphabetical order (title included), since I don’t want to show preference to any of them…

Somehow, they all sound the same.

I don’t want to give away the ending of the story, so I’ll just mention that Lavaeolus shows up in Hell to assist his descendant in finding a way back home.

Eric is a quick, fun romp through places and times of the Discworld. It’s probably not Terry’s best book, but it’s definitely worth a read.

Did I just call it a romp? Sorry.

Get your own copy of Eric at Amazon here.
Summary 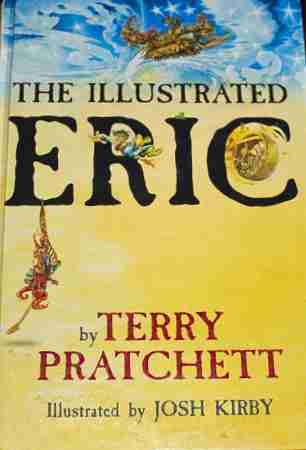