If you’re old, like me, you may have lived through the original instances of postal workers “going postal“. Terry’s novel, Going Postal, was published in 2004, so I’m sure he had those tragic incidents in mind when he titled his book.

But enough about that. I just wanted to mention it briefly for those youngins who may have been wondering where the name came from.

To the best of my knowledge, Sir Terry was not a collector of stamps or pins.

To the best of my knowledge, I am a stamp collector.

As such, I can tell you that all of Terry’s pokes and jabs at collectors (of pins, stamps, or anything similar) are all quite accurate.

Stamp collecting may not be as big of a hobby as it was about 40 years ago, but it still has its advocates and at least a few kids become new collectors each year. At least, I think they do. It would be sad if they didn’t.

With the advent of the Internet, local stamp (and pin?) shops, like Dave’s, are much harder to find these days than they used to be.

I’m not sure, but I think that services like “approvals” are much rarer today as well. A stamp approval service works like this. Someone who has a lot of different stamps (probably in stock books, as opposed to albums) sends them to you for your approval. You keep the ones you want, pay for them, and either send the rest back or possibly send them on to the next person in line.

You never know what you’ll be getting specifically, which is part of the fun. Perhaps you’re interested in United States stamps, so you’ll request that you be sent only US issues. Other than that, you just never know. This is very similar to Stanley’s “joy of sacks” mentioned in Going Postal.

Dave’s shop was only called Dave’s Pin Exchange in Going Postal, but we know it acquired the extended name later. And that only makes sense, seeing how easy it was for pin collectors, like Stanley, to start collecting stamps as soon as they became available.

At Dave’s, you could get all of the following publications. (And if you couldn’t, I’m sure he could order a copy for you.)

If that seems like a really long list, trust me, it’s not unreasonable. In it’s heyday, any collecting hobby will have at least that many in print. And if today you include websites, you can at least double the expected number. At least.

Sticklers for Details: The Endless Variations

Stamp collectors (and, I assume, pin collectors) can sometimes go bonkers when it comes to variations on a theme. In this case, the theme is the average, yet perfect, version of a stamp, and the variations are all the many copies that have different shades of ink color, different perforation spacings, different types of paper on which they were printed, mistakes (technically, errors), watermarks, printing methods, and on and on.

I have three stamp collections. One consists of used, 19th century, United States stamps. Another contains precanceled stamp from Wisconsin. The final one is made of worldwide stamps that are triangle-shaped (similar to the $5 Snkh-Morpork stamp shown here).

Speaking of all those variations, I don’t like that there are so many for older US stamps, so I created my own catalogue that folks can use if they are of a like mind. Instead of the many hundreds of varieties you’d have to acquire to make your collection complete, I limit that number to just 109. While you still may not have the funds to get all 109 of those stamps, it’s at least a more reasonable goal, IMHO.

Terry knew what he was doing when he made the first Ankh-Morpork Post Office stamp. Just compare the two below.

Well, maybe not quite nuf. You may not know that the one on the right is nicknamed the Penny Black and is the first stamp ever issued (by Great Britain).

One last item before I stop writing about this amazing Pratchett story.

Not many Discworld novels contain actual chapters. Terry usually just flows from one scene to the next via a break in the text and maybe a few asterisks.

Going Postal, however, is unusual in that, in addition to being comprised of chapters, said chapters are actually numbered.

I just recently noticed that the chapter between 7 and 9 isn’t what the average person would expect. If you know how Terry’s mind works, though, you can guess what number he slips in there.

Go a little postal yourself with your own copy of Going Postal.
Summary 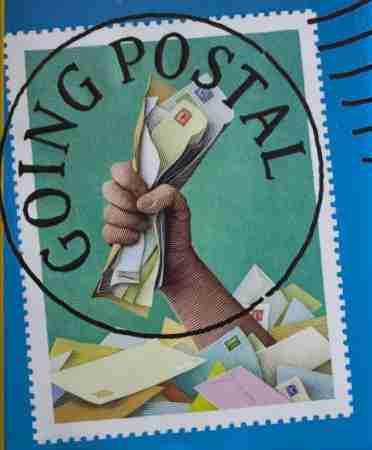