Captain Samuel Vimes of the Ankh-Morpork City (Night) Watch is an awesome character in Guards! Guards! (and other Discworld books).

But this wasn’t always so.

The first time we meet Captain Vimes – on the first page of the book* – he has the adjective “drunken” attached to his name. We then see him immediately stagger down the street and fold himself into the gutter in front of the Watch House.

Aside: There is a motto over the door of the Watch House in the ancient tongue of the city. It says, “FABRICATI DIEM, PVNC. If you remember your high school Latin+ (No?), you’ll immediately understand this reference to the Dirty Harry Callahan (Clint Eastwood) movie, Sudden Impact, that premiered six years before Guards! Guards! was written. Never mind that Sergeant Colon says it means, “To Protect and To Serve”.

From a difficult conversation he has with himself, we learn that he really loves Ankh-Morpork – no matter what kind of a lady*** she is. This is one fact about Sam Vimes that will stick with him throughout his life.

Other things will change. Sometimes significantly.

Even over the course of this story, Sam will change from a slob in the gutter to a rather respectable officer of the Law, who may even fall in love.

Vimes and Lupine Wonse, the secretary to the Patrician, had both grown up in the Shades. The gutter in which Vimes currently found himself was probably an improvement in comparison.

Later, Vimes is called to appear before Wonse because one of the Watch had arrested a member of the Thieves’ Guild – something that just wasn’t done, only partly because it would be rather pointless. During his conversation with Wonse, we learn this about Vimes…

“He was vaguely aware that he drank to forget. What made it rather pointless was that he couldn’t remember what it was he was forgetting any more.”

Brilliant. You might have to think about that last line twice to see just how good (and twisted) it is.

And then there’s this little sarcastic gem that the sobering Vimes spouts at the end of his meeting with Secretary Wonse.

“Right you are, Mr Secretary,” he said. “I’ll see to it that he learns that arresting thieves is against the law.”

The funniest thing about that is that Wonse probably thought he was only dead serious.

Not too long after this, Vimes shows his love of the city and its inhabitants while investigating the alleged – well, not so much alleged as guess at – dragon incident in the Shades.

“He found he didn’t like the idea of citizens, even of the Shades, being turned into a mere ceramic tint.”

And then Sam Vimes meets Lady Sybil (Deidre Oglivanna) Ramkin. And his life begins – just a little – to be turned upside down – or perhaps, lopsided.

Lady Ramkin is one of several noble ladies who cares for the smaller breeds of scaly fire-breathers called swamp dragons. Sam goes to her for information on dragons in general and ends up, if not smitten, then at least captivated by the Lady.

This is probably best shown in their big Goodbye Scene.

Captain Vimes had just been sacked. He mentioned to Lady Ramkin that he had other job offers he could now consider. The Lady says…

Lady Ramkin twisted her handkerchief round and round in her hands.

“Yes, I expect I had better be going.”

There was a pause. Then they both spoke at once.

“No, you were speaking.”

“Oh. Yes.” Lady Ramkin gave him a washed-out smile. “Can’t keep all these offers waiting, can you,” she said.

She thrust out a hand. Vimes shook it carefully.

“Do call again,” said Lady Ramkin, more coldly, “if you are ever in this area. And so on. I’m sure Errol would like to see you.”

He stumbled out of the door and walked hurriedly down the dark, overgrown path. He could feel her gaze on the back of his neck as he did so or, at least, he told himself that he could. She’d be standing in the doorway, nearly blocking out the light. Just watching me. But I’m not going to look back, he thought. That would be a really silly thing to do. I mean, she’s a lovely person, she’s got a lot of common sense and an enormous personality, but really…

I’m not going to look back, even if she stands there while I walk all the way down the street. Sometimes you have to be cruel to be kind.

So when he heard the door shut when he was only halfway down the drive he suddenly felt very, very angry, as if he had just been robbed.

*I’m assuming the first page of all editions of Guards! Guards! has enough text on it to include our first encounter with Captain Vimes. Any that don’t should be tossed in the bin.**

**I’m American. I have no idea why I just called the garbage, the bin.

+Okay, so Pvnc is really more of a reverse transliteration.

You can get Guards! Guards! at Amazon here. 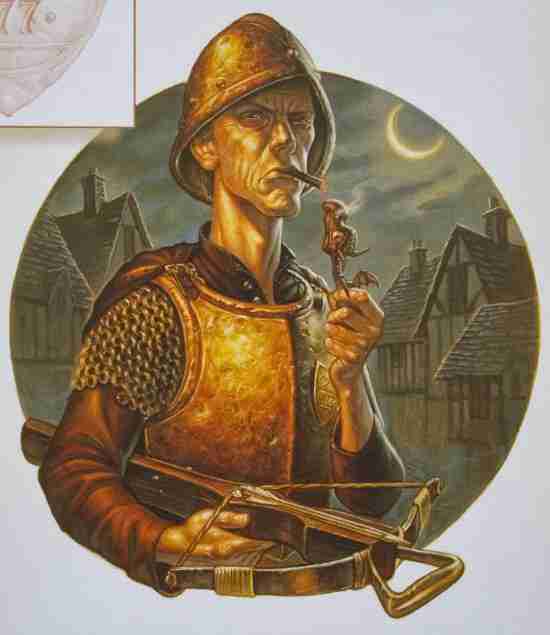 Article Name
Captain Vimes - Up and Coming from Down and Out in Ankh-Morpork
Description
The growth of Captain Samuel Vimes of the Night Watch in Guards! Guards!
Author
Gary Sonnenberg
Publisher Name
Narrativium Reviews
Publisher Logo