Ossifer, I ken I hae found a wee abbomincen.

Are ye daft or hae ye had tae much tae drink? ‘Tis officer an’ abommy-nashon.

Monstrous Regiment has several interesting topics I could explore. There are two that I’ll take a look at here. One is the names of the officers in the Borogravian military – their last names in particular. The other is the Abominations unto Nuggan – not all 6668 of them.

I hope you find them interesting.

This list below includes all the officers I could find who may have had either an article of clothing or a food dish (or both) named after them. To have received such honors is the highest accolade a Borogravian officer can expect. (I didn’t double check to make sure everyone in the list is Borogravian, but I’m pretty sure they are.)

Only a few of these officers have their honors specifically mentioned in Monstrous Regiment. The others we must infer from roundworld associations. That said, I think you’ll agree that it is these people from whom the various objects did in actuality derive their names.

Brigadier Galosh – It is unclear whether the galoshes (rubber boots, for the youngsters reading this) owe their name to this brigadier (general?) or to the major (below) of the same name. For that matter, it’s not certain that these are two separate individuals or not.

Colonel Henri Jumper – The jumper is normally a sleeveless, collarless dress worn over a blouse, sweater, or other shirt. One sometimes wonders if some of these officers were related to each other.

Colonel Legin – This one may be a stretch, but I think the name refers to leggings – generally (no pune intended) tight-fitting apparel worn on women’s legs – sort of like long, footless stockings – for warmth.

Colonel Olga Cumabund – Somewhat surprisingly, here we have something usually worn by men. The cummerbund is a waist sash often worn with a tuxedo.

Colonel Vester – The vest is worn by both men and women on many occasions.

Corporal Strappi – I’m not sure if this one was intended either, but straps of all types are found in clothing worn by nearly everyone at one time or another.

General Annorac – I must admit that I had to look this one up. An anorak is a jacket (usually a pullover…hmm) that is long enough to cover the hips. I probably wouldn’t have considered researching this one, but it was a general’s name, so I figure it must be important.

General Mildred Froc – Both the Beef Froc and the Froc Coat are so named because of the general. One almost wonders if that’s why Mildred was able to advance to this rank in the first place. That would be putting the cart before the horse, so to speak, but still….

General Puhlover – A pullover can be something like an anorak (see above) or a sweater (see below). In either case, the pullover is very common these days. This may somehow be related to the officer’s rank.

Lieutenant Blouse – Besides denoting a lady’s buttoned shirt, the blouse is actually a term still used in several military outfits.

Major Galosh – See the Brigadier near the top of this list.

Major Janet Derbi – The derby hat is mainly called by this variation in the United States – a bit surprising from a British author like Terry. It seems he would have first thought of this as a bowler.

Major-general the Lord Kanapay – One of the few food references, the canapé is a small snack food – a horsey dervey – served (usually) in more posh circumstances.

Sergeant-Major Sweat – Do you own a sweater? If not, why not? Go out and get one now!

Nuggan was mentioned briefly in The Last Hero where he was said to be in charge of paperclips, correct things in the right place in small desk stationery sets, and unnecessary paperwork. My notes say that he prohibited many activities and things.

In Monstrous Regiment, those prohibitions become full-fledged abominations for this Borogravian god.

The first items in this list come directly from Monstrous Regiment. Following those abominations are the numbered ones found in The Compleat Discworld Atlas.

I make no judgment calls on whether these items truly are abominations or not. Some of them quite obviously are, but others are questionable, to say the least.

From the Atlas, presented in the same order as shown there – in case there’s a rhyme or reason to it.

If you find any additional Abominations (unto Nuggan), let me know, so I can add them to this list. 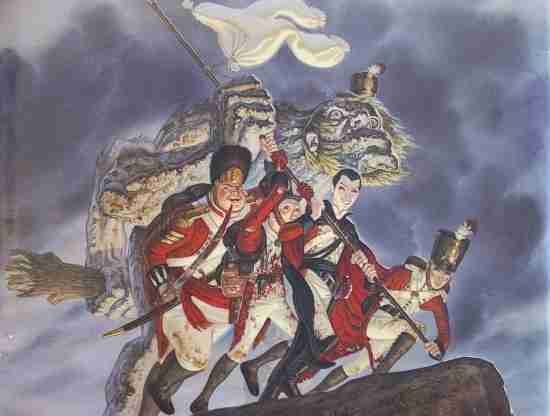