Ay! An’ we get tae fight yon hiver!

I’m almost certain I once had a couple of grand topics to write about concerning A Hat Full of Sky at one time, but if I did, those ideas have since flown the coop. Perhaps they’ll return the next time I read this book.

Since those First Thoughts are now a Shambles, I’ll start with a few notes about a witch’s shamble.

The creation of a shamble is one of the most interesting aspects of it. Apparently the only two requirements are that it be held together with string and that it include something living.

You can assume, then, that most witches (Granny Weatherwax probably being a notable exception) carry a bit of string with them at all times. That their pockets are always full of miscellaneous objects goes without saying.

Speaking of the Feegles, as this novel is largely about Tiffany Aching, it follows naturally that it’s also largely about (or aboot) the Nac Mac Feegle.

The Chalk Hill Clan of the Nac Mac Feegle – and especially the Big Man, Rob Anybody – have a geas to protect Tiffany at all costs. Given that they don’t have anything to lose (being already dead, according to their thinking), coming to her rescue time and again isn’t really a big deal.

In fact, they quite enjoy it as it normally involves fighting someone or something, like the hiver.

I also quite enjoyed A Hat Full of Sky. I remember thinking (long ago) that I might not like the Tiffany Aching books as much as the other Discworld novels because they seemed to be intended for a younger audience.

Maybe they were written for youngsters, but then I must just be young at heart, because these are some of the most touching books I’ve ever read.

Semi-Spoiler Alert: Wait till we get to The Shepherd’s Crown.

Find your own copy of A Hat Full of Sky at Amazon.
Summary 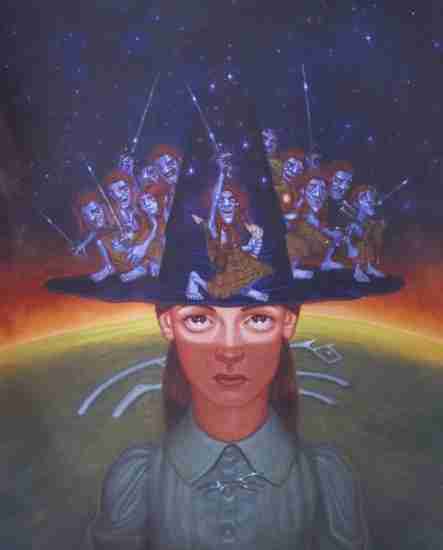